We know we left you hanging with the excerpt from Jack Spencer’s letter about his unlikely campaign for Student Government Association president in 1970 that appeared in the print version of our magazine. Was he able to topple the mighty fraternities’ hold on student government? Read on to find out.

Time was running out. We didn’t think we needed a secretary, but because of the SGA fiscal responsibilities, we did need a quick-pick treasurer. Rod Benjamin, a likable, politically moderate classmate, decided to join us. But later, when the campaign got heated up and we were being labeled “extremists” and “revolutionaries,” the quiet and sensitive Rod would re-examine his political views and ask to bow out. At our beseeching requests, he left his name on the ballot, but [he] kept a low[er]-and-lower profile.

Just prior to the election, we ran into a major problem. The Election Board decided that the voting would be for each individual office, not for the entire ticket. I couldn’t understand the Election Board’s reasoning. Potentially mixing widely disparate agendas seemed ludicrous. And now, even if all three of us won, because we hadn’t nominated a secretary, we would automatically forfeit one position.

Despite that oddball election rule, Judy, Rod and I won our individual offices. The position of secretary went to Beverly Bull of the Active Involvement Party. Beverly was understandably opposed to much of our “radical” program. Plus, Rod, still reeling from campaign shock, began to question our too much, too soon agenda. Two weeks after we were all “sworn in,” both Rod and Beverly rescinded their offices. Down to Judy and me.

We replaced Rod and Beverly with Laura D’Anna, a fearless free-spirited, popular member of the University Players (theater). … And so, by our decree, Laura became the SGA secretary/treasurer. Dubbed the “Beauties and the Beast,” we were surprised that our arbitrary (unelected) replacement of those two SGA positions didn’t upset the fraternities. Maybe it was because Laura was so popular, or maybe, due to a recent event which I will describe, the fraternities were focused on frying a bigger fish.

Five days after taking office, I was at the center of a huge, “take it to the streets” parking demonstration where traffic became inextricably snarled at a Mount Royal Avenue intersection. U of B, being a downtown institution, had a dire shortage of parking spaces. Students couldn’t legally park on most streets until after their first-period classes began. Pricy parking tickets were being so copiously levied that student frustration finally exploded. [A] police officer approached me and asked if I would instruct the students to disperse. I said that I would, just as soon as the head of traffic and transit, “Box” Harrison, promised us that he would change the times on those parking signs to accommodate our early classes. The officer contacted Mr. Harrison. Within minutes of Mr. Harrison’s arrival and his promise to alleviate the problem, the students filed orderly back into the university.

I found out through a newspaper article that [UB] President [H. Mebane] Turner had just delivered an interesting gift to the students. According to The (Baltimore) Sun, “The University of Baltimore [had] approved a student election” to grant one student a seat on the Board of Trustees “to voice the student body’s views.” This student was to be elected before the Oct. 11 board meeting. No one had mentioned this to me, and to many of our supporters, the administration’s “gift” had the smell of subterfuge.

Battle lines were drawn, either for or against the new election. Mark Beckwith, the [news] editor of the Student Press, tended to be pro-administration. Frank Napfel, the editor-in-chief, was a supporter of mine. But after an in-house meeting of the press staff, Mark conceded that electing a new student leader would be divisive. He subsequently wrote a lead editorial where he pointed out the inherent duplicity of a second election. He said we already have a “duly-elected” student leader, advocating that it was time “to reassert Spencer as the leader of the student body.” With dissent rising and both top editors of the Student Press opposed to the idea, the administration’s enthusiasm fizzled, and the election was indefinitely postponed.

For a while, the political intrigue continued, as both sides engaged in slippery politics. For instance, we couldn’t get the required quorum to introduce legislation because fraternities and sports clubs were boycotting the SGA meetings. So we reduced the size of the needed quorum by suspending all organizations that had chronic absenteeism. The resulting, [friendlier] atmosphere helped us get some important bills passed.

But eventually, many fraternity members became cooperative, making it possible for us to keep all of the Concerned Party’s promises. … We restructured the SGA, got [the] Teacher Evaluation voted on by the faculty ([it] passed, 53 to 15), got the “feared” Black Student Union into the SGA and had an antiwar protest that would close down Charles Street at rush hour as a large segment of our student body marched northward to meet our fellow war protesters at Johns Hopkins University.

We even secured the right for the students to select the university’s guest speakers. The Guest Speaker Program, which paid nationally known personalities handsome sums to speak at the 5,000-seat Lyric [Opera House], had theretofore been within the administration’s conservative domain.

People would have differing theories on how our unlikely trio was able to fulfill all those “impossible promises.” One politically savvy acquaintance, the student who managed the school’s bookstore, once described our methods of getting things done as being “eerily Machiavellian,” citing the case of the Black Student Union as an example. He grinned and said he respectfully meant that as a compliment.

I had asked the president of the Black Student Union, Percy Jones, to temporarily change the name of his organization to the Cosmopolitans. The SGA would also need to approve their bylaws. Luckily, the BSU bylaws were benign enough, basically saying that its members wanted to improve conditions in the inner city, and who among the SGA groups could deny that stark reality? I also asked Percy to send a soft-spoken representative to apply for admission, someone whom the SGA members were unlikely to recognize. When the Cosmopolitans were voted into the SGA, they simply changed their name back to the Black Student Union. The blocking of an organization’s name change was not within the SGA’s legislative purview. And that’s how the Black Student Union got into the SGA.

It was my duty as SGA president to appoint the chairman of the 1971 Awards Committee. I appointed a fraternity member to create and preside over that committee, but I had to sign or approve certain commendations, trophies and letters of merit.

I met with one of the committee members one day in mid-spring. Dale Swavely, a well-known member of Kappa Omega, was there to present the committee’s tentative list of 1971 award winners. Dave said the committee had decided to give me the Leadership Award, an attractive, most highly prized plaque, plus a couple other awards.

The Leadership Award. That was a nice gesture by the Awards Committee. But I had already been rewarded with more feathers than this country boy’s cap could fathom. I had been on the debating stage and the Lyric stage, had my column in each issue of the Student Press, had been a member of a weekly FM radio program, had been a guest panelist on a local TV show (y.IN TV’s From The Top), had my picture in the News American, had been interviewed for an article in The (Baltimore) Sun and had numerous other forms of recognition—and, more importantly, I had discovered a new sense of humanity ... and humility. But awards? I had had my political fling, my 15 minutes of [infamy], experiences that went beyond recognition, amazing things that I never thought would happen to me. I just didn’t want any awards.

It wasn’t that I tried to refuse their awards. I just wanted the Awards Committee to realize how much of our success was due to Judy and Laura, neither of whom had ever asked for a favor or to be excused from a distasteful assignment. They had worked on so many projects, but many of their efforts went unseen or were underappreciated: writing proposals, serving as pacifying persuaders on administration policy committees, handling much of the legislative legwork and gracefully representing the more gentle face of change. I tried to explain, but Dale kept insisting, until … finally, I agreed to accept their awards, but only if the committee would present the singular, most prestigious award, the Leadership Award, in triplicate. And only if the members of his committee would swear to keep mum on this Leadership Award arrangement. The committee agreed to these terms.

The 1971 Awards Banquet: I remember Mr. Craig accepting the Advisor of the Year Award and Percy Jones accepting the Outstanding Contributions to the Community Award (on behalf of the BSU). But what I remember most about that night was watching Judy and Laura receive their Leadership Awards (among their other tributes). That was special. Those two young ladies were the “smilingest” and, I still say, the most deserving award recipients at that celebratory occasion.

The “one-year-revolution” came to an end, and U of B settled into a more tranquil time, as Ed McCauley, a reserved young man and a respected member of Kappa Omega, became the first chairman of the newly formed Student Senate. 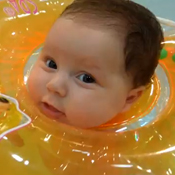 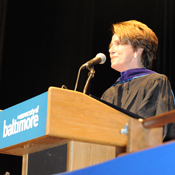 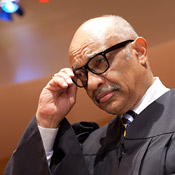 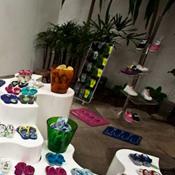 Learn more about the Field Study group’s visit to Brazil.