During the 2015 academic year, Ronald Castanzo, associate professor in the Division of Science, Information Arts and Technologies, led UB students on an excavation project that quite literally uncovered a vital piece of Baltimore’s storied African-American history.

Castanzo and his students set their sights on East Baltimore’s original Laurel Cemetery, a nondenominational site created in 1852 that was often selected as the final resting place for African Americans of all socioeconomic levels for more than 80 years. After the cemetery company declared bankruptcy, new owners decided to build the Belair-Edison Crossing shopping center on the site in the late 1950s—and the NAACP fought to have the cemetery moved to a new location in Carroll County.

Supported by a UB Foundation Fund for Excellence grant, the UB crew embarked on the Laurel Cemetery Project, an archaeological research initiative that, through excavations and surveys, would ultimately reinforce an existing theory that only a portion of the original graves had been moved to Carroll County. With proof in hand, Castanzo and his students plan to advocate for the addition of a marker to make visitors aware of this site’s historical significance.

Thank you for supporting the Fund for Excellence and for giving our students a chance to preserve a largely forgotten piece of the city’s past.

Want to support UB students’ next adventure (and more)? Make a contribution to the Fund for Excellence online or by including your gift in the postage-paid envelope in this magazine. 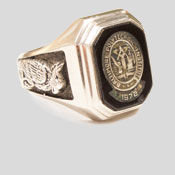 Did You Graduate From Both UB and Baltimore Polytechnic Institute?

Now calling graduates from both UB and Poly.