MARYLAND, like the nation, is in crisis. In 2016, 2,089 Marylanders died of drug and alcohol-related deaths, an increase of 66 percent over the previous year and triple what the number was in 2010. These alarming statistics are driven by increased mortality from opioid use, which accounted for 89 percent of these deaths, according to the Maryland Department of Health & Mental Hygiene. The new Center for Drug Policy and Enforcement (CDPE) at the University of Baltimore intends to be an agent of positive change against a problem that has grown to untenable proportions.

The creation of the CDPE was announced in March. Part of the College of Public Affairs, the center sits where policy and policing meet the reality of the opioid epidemic. Through the CDPE, UB will apply scientific research and best practices to combat the issues that contribute to the drug-related violence and addiction ravaging communities across America.

"The Center for Drug Policy and Enforcement will enhance the social justice agenda promoted by our College of Public Affairs by helping to address a multitude of problems associated with substance abuse," says Kurt L. Schmoke, UB President. "We expect research from the center to offer both short term and long term solutions to this challenging societal dilemma."

The Overdose Detection Mapping Application Program lets first responders log incidents of overdoses with the push of a button, and this information is then mapped and analyzed.

DATA AS A WEAPON

Executive director Tom Carr is leading the CDPE. A retired lieutenant colonel in the Maryland State Police, Carr also leads the High Intensity Drug Trafficking Area (HIDTA), a federal grant program that is the cornerstone of the CDPE.

The HIDTAs—there are 28 throughout the country—are administered by the White House and provide resources to federal, state and local agencies with the goal of reducing drug trafficking and production. The Washington/Baltimore HIDTA began in 1994 to serve Maryland, Washington, D.C., Virginia, and parts of West Virginia, and was previously housed at the University of Maryland College Park as the Center for Safe Solutions. Carr explains that it makes sense for HIDTA to move to UB because of the school's location, the public service mission of the College of Public Affairs and the school’s commitment to applied research.

"It’s a real opportunity for the University of Baltimore and its faculty and students to get more engaged with the community, more involved with serious problems communities all over the region are facing, and to apply sound research and methods to these problems and come up with meaningful solutions," Carr states.

The weapon of choice in this war on drugs might seem innocuous: it’s data. Yet data, Carr explains, is fundamental to effective policing and policymaking. By collecting and analyzing relevant information and translating it into predictive analysis, both law enforcement and policymakers can develop evidence-based strategies rather than being reactionary.

One example is the Overdose Detection Mapping Application Program (ODMAP) developed by HIDTA. The mobile-based application lets first responders log incidents of overdoses with the push of a button, and this information is then mapped and analyzed. When a spike in overdose incidents is detected an email is automatically generated and sent to the affected community. Analysis has shown that a spike in overdoses in one community will likely mean a spike in another community, so in these instances communities along the drug’s routine route are also notified. By mapping these overdoses, law enforcement and public health officials can anticipate and prepare for overdose spikes before they happen. Developing the potential of ODMAP will be on the nascent CDPE's agenda.

For years, drugs and addiction have been pigeonholed: drugs were bad things done by flawed people. Particularly as opioid use has surged out of inner cities into well-to-do suburban and urban neighborhoods, those old prejudices have started to deteriorate. With the CDPE, Carr sees an opportunity to look holistically at the challenges of drug activity by addressing the myriad factors that play a role in drugs’ persistence, including sociology, education, treatment, prevention, government policy, public health and enforcement.

Roger Hartley, dean of the College of Public Affairs, explains that this is why UB is such an ideal partner for the CDPE.

"The issue of drug policy and public policy hits every facet of the College of Public Affairs and its schools: we do criminal justice, we do health and human services, and we do public administration and global affairs," Hartley states. "Each one of our three schools has a unique fit as well as something to say and something to gain from having a center like this at UB working on such a critical issue."

The creation of the CDPE is a win for everyone, says Hartley. Because HIDTA is a known and respected entity with a long history, having it as the heart of the CDPE will provide UB an opportunity to network with state and federal officials at the highest level. Simultaneously, UB will be able to bring its academic strength and its partner institutions in academia to CDPE, creating a truly multi-disciplinary perspective on drug-related issues. The collaboration will also be a powerful force for attracting new grants.

"As dean, I have the opportunity to build out the academic side of this center," says Hartley. "There have already been and will continue to be opportunities for our faculty to collaborate with the staff at HIDTA and there are incredible opportunities for students to intern and perhaps even find career paths at CDPE."

"UB sits at the epicenter of the heroin and addiction problem in Baltimore. For UB to partner with the center and work on this problem in the city is a symbolic victory."
-Roger Hartley

Hartley has every reason to expect student and faculty interest in the collaboration between CDPE and the College of Public Affairs. Addiction and its related challenges has infiltrated almost every echelon of society, so that few people can say they haven't been touched by it in some way.

Robert Neuman, B.A. '15, is one such student. Currently 51, Neuman was previously a chef until an injury caused him to retire with a disability. He then decided to return to school; he is currently enrolled in the Masters of Public Administration program.

But that’s not his entire story.

After the injury that caused his disability, Neuman (who has a self-described family history of substance abuse) had easy access to pain medication. It wasn’t long before he became an opioid user. Luckily, he says, he got into treatment and has been in recovery for nine years. But his experience changed his career trajectory, and after he got clean and returned to school he discovered at UB a passion for researching drug policy.

Then he happened to see a news story about the CDPE in his Twitter feed. "I immediately messaged [Hartley] through Facebook and said I wanted to get involved," he recalls. "I said I don’t care what I have to do, I'll fetch coffee if I have to, but I want to be a part of this.

"I understand how fortunate I am to be one of the individuals who suffers from this disease of addiction who's no longer using drugs, and have been able to became a productive member of society," Neuman continues. "I know the problem…I'm one of those statistics where this has impacted me, and it continues to impact my family."

Neuman’s role at CDPE is evolving as the center does, though it currently involves research and special projects. His primary interest lies in gathering data on individual outcomes after drug treatment—information that is surprisingly hard to find now—and analyzing the data in order to create more effective treatment methodologies. But he’s ready to work on anything relevant to his progress toward a career as a policy health analyst.

"It’s exciting for me to have a broad spectrum of opportunities," he states. "This is such a new field and it’s exciting to be here building something from the ground up. I want to be part of that."

OPTIMISM FOR THE FUTURE

The CDPE is in its infancy, but it's growing quickly. There are already plans for an Opioid Summit next spring to gather regional leadership and public health officials to look at the issue of rapid response strategies to overdose spikes. There is also discussion about creating a certificate program in criminal intelligence that could evolve into a degree program.

Long-term, Hartley is enthusiastic about building faculty capacity. He hopes to create student fellowships and perhaps even endowed chairs. He has every reason to believe the CDPE will grow into a major place of research and policymaking that will showcase the College of Public Affairs as a preeminent place of study in the United States.

He also sees reason to hope that the work of the CDPE can have a real and positive impact on issues such as drug trafficking, drug use and violent crime. "UB sits at the epicenter of the heroin and addiction problem in Baltimore, where this has been a problem for a very, very long time," says Hartley. "For UB to partner with the center and work on this problem in the city is a symbolic victory.

"My hope," he continues, "is that through forums and policy summits we can bring people together and start working on this here in the city. And if we can solve the problem here in Baltimore, we can solve it anywhere." 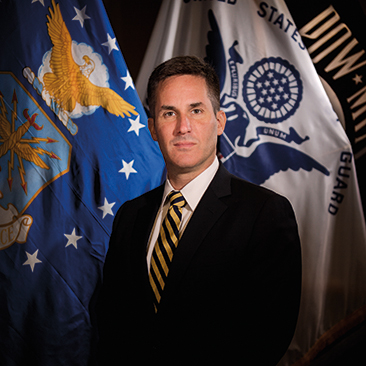