in the country is the ranking U.S. News & World Report gave the UB School of Law's clinical law program. This represents a big jump from last year (#21) and is the highest ranking ever attained by the UB law clinics.

pledge was received in March from The Bob & Renee Parsons Foundation for the Bob Parsons Veterans Institute which offers programs that provide valuable resources and support for service members. This is the third million dollar gift made by Bob Parsons, B.S. '75, D.H.L. '08, and his wife, Renee, and the second in support of veterans and service members pursuing a degree at UB.

is UB's rank out of 29 Maryland colleges for highest median earnings for former students  10 years after admission, according to the Baltimore Business Journal.

since the Yale Gordon College of Arts and Sciences began as a junior college, introducing a practical blend of general and specialized education to UB’s existing business and law school offerings.

of when UB returned to a four-year undergraduate program as part of the state's plan for higher education, in response to the increased demand for accessible, high-quality public education.

noteworthy Maryland buildings and monuments were identified by USA Today and the American Institute of Architects (AIA)—and UB’s John and Frances Angelos Law Center is among them. The 12-story Angelos Law Center, designed by Behnisch Architekten and Ayers Saint Gross, opened in 2013 and was the first U.S. law school building to receive a LEED Platinum rating from the U.S. Green Building Council.

At Home and Abroad

Professor Ivan Sascha Sheehan zeroes in on conflict both at home and abroad.

From Here to There 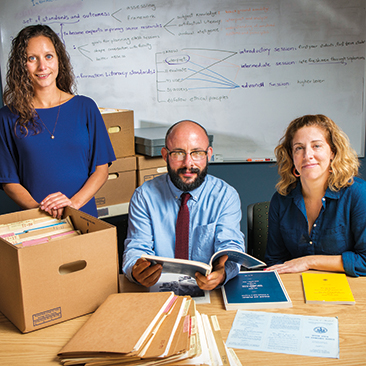