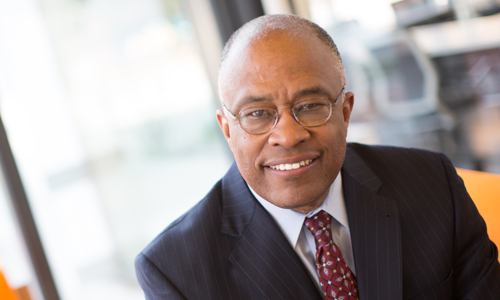 Kurt L. Schmoke was appointed as the University of Baltimore’s eighth president as of July 7, 2014. He brings to the University a wealth of experience in public service, higher education and leadership.

Schmoke is a believer in Baltimore and a big believer in UBalt. His message to the University community, its friends and supporters is this: Education works—for people, for neighborhoods, for society as a whole.

“It has been clear to me for many years that next to my parents, it was the education I received that has had the most profound effect on the achievements that I have made in my adult and professional life,” he wrote in a 2007 editorial in The Journal of Negro Education. “The interaction between family and teachers was significant, sustained and life altering.”

Schmoke served as the mayor of Baltimore from 1987-1999 and was the Baltimore City State’s Attorney from 1982-1987. Prior to joining UBalt, he was dean of the Howard University School of Law in Washington, D.C., from 2003-2012. Following that, he was appointed general counsel for Howard and also served as the institution’s interim provost. 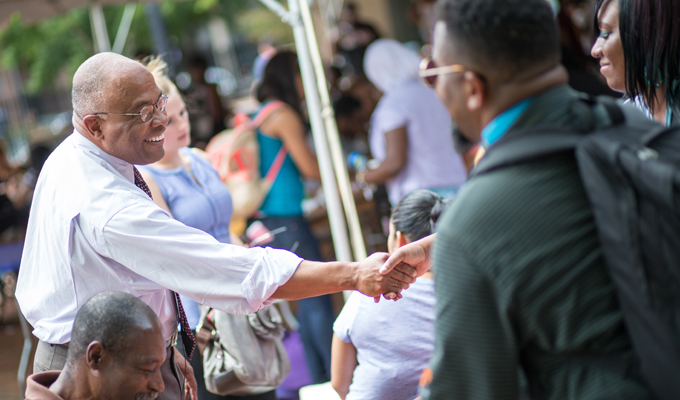 You’re making a great deal of difference, not only in your lives but in the lives of this community. This community thrives because of people committed to lifelong learning. There are so many opportunities, not only in Baltimore but in the surrounding region.

Learn about UBalt’s Murray Alexander Schmoke Jr. Scholarship, which benefits students in the College of Public Affairs. Schmoke established the fund in honor of his younger brother, who died in a 1994 car accident while volunteering as an English teacher in South Africa.

During his tenure as Baltimore’s mayor, Schmoke initiated a number of innovative programs in housing, education, public health and economic development. In 1992, President George H.W. Bush awarded him the National Literacy Award for his efforts to promote adult literacy. Two years later, President Bill Clinton praised his programs aimed at improving public housing and enhancing community-based economic development. The Clinton administration selected Baltimore as one of six cities to receive an Empowerment Zone designation in 1994.

Schmoke’s public service record extends back to the 1970s, when he was appointed assistant director of the White House Domestic Policy Staff under President Jimmy Carter. He also served as an assistant U.S. attorney for the District of Maryland.

After completing three terms as mayor, Schmoke returned to the practice of law as a partner in the firm of Wilmer, Cutler and Pickering. He became actively involved in the National Bar Association and the American Bar Association, serving a term as chair of the Council on Racial and Ethnic Justice of the latter. He has provided countless hours of pro bono legal services to charitable organizations such as the Children’s Health Forum, a nonprofit group established to combat lead poisoning among children. Later, Schmoke’s commitment to public service led him to focus on increasing Howard University’s bar passage rate when he was the law school’s dean and to expand its clinical law program to emphasize environmental justice, fair housing and civil rights.

Schmoke earned his undergraduate degree in history from Yale University. While at Yale, he co-founded a child care center that has been in continuous operation as the Calvin Hill Day Care Center and Kindergarten since 1970. He pursued graduate studies on a Rhodes Scholarship at Oxford University and earned his Juris Doctor degree from Harvard Law School.

Schmoke is married to Dr. Patricia Schmoke, an ophthalmologist. They have two adult children, Gregory and Katherine.

Clear
Back to Offices and Services
Last Published 12/3/21