We stumbled upon an archive of old, unlabeled UB photos that prompted us to do a little sleuthing, and we need your help. Do you know the people pictured in this image? Do you know when or why this photo was taken? Fill us in: Contact the Office of Alumni Relations by email or at 410.837.6131.

The photo featured in our last issue prompted a few alumni, staff (current and past) and friends to email us in hopes of solving the mystery. We thank them for weighing in, and we look forward to hearing from more alumni about the photo included in this issue.

From Patricia Wicklin McCubbin, B.A. ’76:
Thought you might like to know a little about this photo. My husband, Bruce [also a UB student at the time], said that this photo was taken in the very early ’70s. It appears to be for a fundraiser. And we both know for a fact that the second guy on the left behind the bar is former Dean of Students George McDevitt in the Rathskeller. It was a happening place!

From Kathy Anderson, dean of students:
The picture is from about 1984/1985. Every fall there would be a Welcome Back Party at Two Crazy Greeks, a bar/restaurant located where Turp’s is now. Staff, faculty and student leaders would be recruited [to] work behind the bar to pour for students. They’d be given [a] special T-shirt, apron or other gear to wear.

The gray-haired gentleman behind the bar, second from left, is George McDevitt. George did a variety of things at UB, including serving as dean of students. The young man next to him was one of the officers of the Vets Club, one of the most active groups on campus.

The woman in the bottom corner, with the glasses, is Sharon Carr-Crouse. Sharon served as an administrative aide to several academic departments and as the assistant for the vice president for enrollment management and student affairs, Dr. Dennis Pelletier. She worked for Dennis for about 25 years before they both retired in the early 2000s.

From Reginald Thomas, former associate director of admission, who phoned in this information:
The man behind the bar taps with the grayish hair and beard is George McDevitt, the former dean of students. Thomas believes the location was the old Rathskeller (basement bar) in the Academic Center. 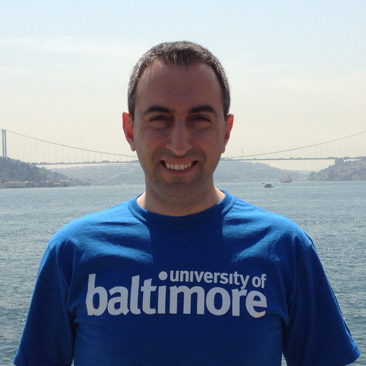 Alumnus Mahmut Aydogmus, M.S. ’03, has returned to his native Turkey but hasn’t forgotten to flaunt his UB pride. 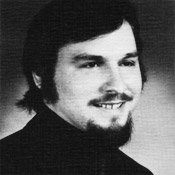 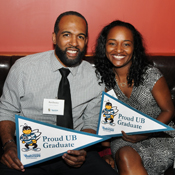