No Place Like Home: How Kurt L. Schmoke Found His Way Home to Charm City … and to UB


There are photos with Bill Clinton. And the Carters. With George W. Bush. And O’Malley, Schaefer and Tommy D’Alesandro III. There are photos of Howard University’s graduating law students. And in a spot of honor in University of Baltimore President Kurt L. Schmoke’s office— alone on a round table near the expansive windows overlooking Penn Station, the Jones Falls Expressway and Charles Street streaming up through the Station North Arts and Entertainment District—is a fist-sized, soft-plastic bee, an homage to Eubie, UB’s mascot.

To say Schmoke is a huge fan of the University’s lovable mascot is putting it mildly. The two are often photographed together, they’ve been spotted high-fiving around campus and Schmoke has incorporated the bee into his wardrobe, even proudly sporting a bright-blue tie dotted with tiny Eubies.

He’s embraced the mascot the way he’s embraced the UB community: with enthusiasm and an off-the-cuff friendliness that shone through at the president’s first-ever presentation to faculty, staff and students in mid-May when the University System of Maryland Board of Regents announced his appointment. “Just call me Kurt,” he said then, putting the community at ease over how to address the former three-term Baltimore mayor who returned to the city to take the helm of its namesake University in early July.

Since then, Schmoke has cemented this approach to his leadership, attending events (he’s been spotted dancing on Gordon Plaza with the deans and cheering on the O’s with alumni) and mingling with students. Responding to WBAL-TV news anchor Stan Stovall’s on-air nomination, Schmoke even allowed Eubie to douse him with freezing water (in addition to donating to the cause) for the summer’s viral philanthropy craze, the ALS Association Ice Bucket Challenge.

“I’m really looking forward to meeting with students, ... to getting to hear their vision of UB,” Schmoke, 65, said shortly after his arrival.

Connecting with students is nothing new for Schmoke, who came to UB directly from Howard University in Washington, D.C., where he served as dean of the university’s law school from 2003-12 and then as general counsel and interim provost. But his interest in education—and specifically in leading an institution of higher education—long predates his tenure at Howard. “During the course of an interview I had—this goes back many, many years; it was my Rhodes Scholar interview—the committee said, ‘If you could look 35 years from now, young man, what would you like to be doing?’” Schmoke recalls. “And my answer way back in the late 1970s was that I’d like to be a United States senator or a university president.” His response was not only prophetic, but it impressed the committee enough to select him for the scholarship, which allowed him to do graduate work at Oxford University in England.

And education in general, he says, has always been a source of inspiration for him. “The thing that’s made the biggest difference in my life, except for having great parents, was having a fine education,” says Schmoke, who graduated from Baltimore City College in 1967 before studying history at Yale University and then earning a J.D. from Harvard Law School. He’s also been a trustee at Yale and Tuskegee universities, at Loyola University Maryland and at McDaniel College.

“I’ve always been committed to promoting lifelong learning and the role of education in a person’s life,” he says. After his political career in the 1980s and ’90s and a period practicing law with a firm in Washington, D.C., Schmoke’s time at Howard University, he says, “was continuing in some way my life of service, but most importantly, it was helping nurture a new generation of leaders.”

Getting back to Baltimore in his new role was “kind of happenstance,” he reveals. Three different friends encouraged him to apply to the presidential position. “The more I looked into it, the more excited I got about the program offerings here, the work of the professors, the impact the students were having in the region,“ he says. “I also was very excited about the physical changes that occurred over the last decade at the University.” He’s quick to emphasize that he’s “trying to build on a great legacy.”

“Excluding marrying a wonderful person, I’m hoping that [my] best achievement is yet to come.”

His own legacy in Baltimore, as city state’s attorney and its first elected black mayor, afforded him opportunities to get to know some previous UB leaders, but he says he hadn’t kept up with the growth of UB and its neighborhood since leaving office in the late ’90s.

“This location was quite challenged in 1999; there were low-income communities nearby, a downtown area that was still struggling, and this midtown area was trying to get a distinctive identity,” he says. “Now this is a much stronger neighborhood, more vibrant. It’s very attractive, a real magnet for activity, and so that has been a very positive, important change. ... This major change happened after I was mayor so I can’t take credit for it, though I might try!” When Schmoke laughs, it spreads across his entire face.

Schmoke indicates, though, that there’s no time to rest on his—or anyone else’s—laurels; there’s work to be done, challenges to be faced. The president has quickly carved out priorities into which he’s thrown himself wholeheartedly:

Kurt Schmoke’s brother, Murray Alexander “Alex” Schmoke Jr., was 20 years his junior, a big gap where siblings are concerned. “Alex came into my life while I was in college, but over the years we became very close,” Schmoke says, explaining that his parents had divorced and remarried.

“He went to the same high school that I attended, and I had a jacket from high school that I decided to put my last name on instead of my first name, so he wore my jacket when he was at Baltimore City College high school,” Kurt Schmoke recalls. By the time Alex graduated in 1987, that jacket was vintage; Kurt had graduated two decades earlier.

After graduating from Morehouse College, Alex turned to his older brother for guidance. “It was ... when he started thinking about what he wanted to do with his life that we had very, very long, detailed conversations,” Schmoke says. “He at first wanted to pursue a finance career because so many of his friends were going into that area, but his heart really belonged to education and public service.” Eventually, Alex’s passions took him to South Africa to teach at a private, parochial school in a city northeast of Pretoria. There, in 1994 at the age of 25, he died in a car accident.

To honor his brother and to highlight efforts to enhance fundraising for University scholarships, Kurt contributed $25,000 in July to establish the endowed Murray Alexander Schmoke Jr. Memorial Scholarship Fund, which provides annual need-based financial support to a College of Public Affairs junior or senior who is a graduate of a Baltimore-based public high school. The student must have a minimum 3.0 grade point average to be eligible and must also maintain that GPA or higher for the life of the scholarship.

“I just thought when I got here and had the opportunity that I would do something in [Alex’s] honor to assist the students and to also bring attention to our College of Public Affairs—and then to send the signal to our friends and alumni that I wasn’t just going to ask them for donations, that I was willing to step up to the plate myself,” Schmoke says.

If you would like to contribute to this or another University of Baltimore Foundation scholarship fund or if you’re interested in endowing your own scholarship in honor or in memory of someone, please contact Theresa Silanskis, M.P.A. ’95, vice president for institutional advancement, by email or at 410.837.6838.

And that’s just the start. Schmoke says he also hopes to increase grant funding for faculty work and to garner more nationwide attention for UB’s academic programs and for student and faculty accomplishments. “Just to give you an example,” he says, “we have an immigration law center. I think some national leaders are paying attention to the work that’s being done here at the University of Baltimore on the immigration issue.” He also points to UB’s strengths in forensic studies, where graduates are making significant impacts in law enforcement agencies on a national level. “I’d like us to be considered an important think tank for major public-policy problems,” he says.

“I hope to be a forward-looking president who is inclusive in style and collegial in manner. ...”

Public policy issues are of particular interest to Schmoke, given his political past. “You can tell I’m a recovering politician,” he says, by taking a peek at his bookshelf. “I find myself reading biographies of elected officials or histories about public policy and political matters.” But the man who dubbed Baltimore “The City That Reads” can hardly be called a one-dimensional bookworm. He’s a self-proclaimed J.K. Rowling fan, having read all of the books in the Harry Potter series.

As a student, Schmoke also excelled on the athletic field, leading Baltimore City College to a 1965 Maryland Scholastic Association A-Conference football championship as its quarterback and then playing defensive back at Yale during his undergraduate years.

Now, he prefers the decidedly less contact-heavy sport of kayaking. “We kayak on a creek that leads into the Chesapeake Bay,” Schmoke explains, noting that while he and his wife, Patricia—an ophthalmologist who practices in Baltimore—have a house in Annapolis, Maryland, they’ll be living in Baltimore during the academic year.

“My wife prefers to go solo, so that we don’t get into arguments,” he says. There’s that laugh again. “It’s peaceful, and it’s a lot of fun.”

Schmoke is clearly proud of his marriage and of his two grown children, Gregory and Katherine, both graduates of the Baltimore School for the Arts high school. “Excluding marrying a wonderful person, I’m hoping that the best achievement is yet to come,” he says.

And that crowning achievement just might take place at UB. “I hope to be a forward-looking president who is inclusive in style and collegial in manner, willing to make the tough decisions—because there will be some—but also one who’s a good listener,” Schmoke says. “I have to get to know this community—students, faculty and staff—and will also have to raise the profile of the University with state elected officials. And I’m looking forward to doing that.” 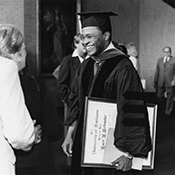 accepting an honorary degree after providing the commencement address for the UB School of Law graduating class of 1985; photo courtesy of UB’s Special Collections 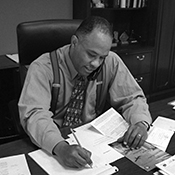 establishing his post-mayoral career at the law firm of Wilmer, Cutler & Pickering in 2001; photo courtesy of The Baltimore Sun 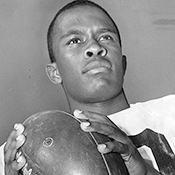 the City College football star in 1966

making a name for himself as the star quarterback at Baltimore City College in 1966; photo courtesy of The Baltimore Sun 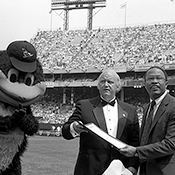 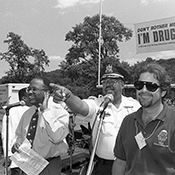 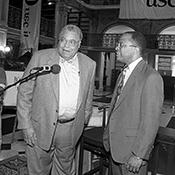 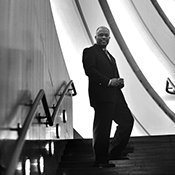 at Howard University in 2009 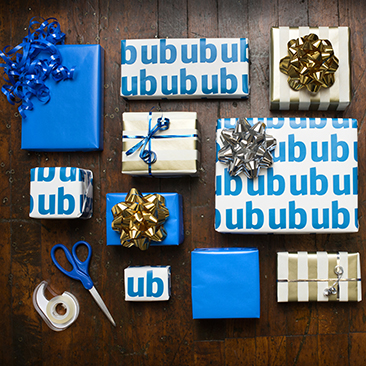 ’Tis the Season to Shop UB

Scrambling to finish up your holiday shopping? Never fear. Our gift guide features options from UB students and alumni.