Bob Fitzsimmons, J.D. ’78, doesn’t remember what he was doing in his Wheeling, West Virginia, office near midnight on a foggy Saturday in September 2002 when a call came in that would change his life. Ever since his early days as a young lawyer—back when he was taking $10-an-hour indigent cases as a public defender, hitchhiking because he didn’t have a car and greeting his clients in his apartment—he has worked from morning until late at night, seven days a week, 365 days a year. Of course he was in the office late on a Saturday night. But the caller, a forensic pathologist from the Allegheny County Coroner’s Office in Pennsylvania, had an unusual request.

Five years earlier, Fitzsimmons had taken on “Iron” Mike Webster, the retired Hall of Fame center for his beloved Pittsburgh Steelers, as a client. It was immediately clear that Webster—the indefatigable warrior who’d toiled in the trenches for 177 consecutive games without missing a single play—was a shell of his former self. The thousands of violent hits, the ferocious approach to the game that had made him an icon had also damaged his brain. The man on the phone, Nigerian immigrant Dr. Bennet Omalu, wanted permission to preserve Webster’s brain for further study.

Webster’s case would send shockwaves across the league; its implications are still reverberating everywhere from the sandlots of forgotten towns like the one where Fitzsimmons grew up playing football to the world’s most famous sporting arenas. Within a decade, Omalu would go from complete obscurity to being lionized in a Hollywood film starring Will Smith.

But Fitzsimmons, the man who took on the NFL and helped start a national conversation about concussions in sports, is content to remain out of the limelight, focusing on what he does best: practicing law. “I still like doing a car-accident case or representing someone on a terrible-injury case,” says Fitzsimmons, 64. “Lawyers do so much good for the world, but we get a bad rap.”

Fitzsimmons’ success story is one few would have predicted. He grew up in Warwood, West Virginia, just north of Wheeling, the middle child in a family with five kids. His father was a pipefitter and so are both of his brothers. He was the only child in his family to go to college—two hours north up I-79 in Meadville, Pennsylvania, where he studied hard and “took a few big hits” playing football at Allegheny College. Friends suggested that he go to law school, so he took a job at a plumbing supply company in Cleveland, saved his money and got into the UB School of Law in 1976.

Fitzsimmons graduated a semester early, at 25, with high honors and moved back to West Virginia. But without a job, office space or a car—he took the bus, walked or hitchhiked until he bought a Honda Accord a few years later—he had to improvise. He took on indigent clients whom no one else would defend.

“I tried tons of criminal cases,” he says. “That was how I learned to practice law.”

In 1984, Fitzsimmons got his first big break: a bad-birth medical malpractice case that was settled for a large sum of money. More civil cases followed in the years to come, and he began to concentrate on personal-injury suits.

When Mike Webster, still a hulking (if diminished) specimen at 45, walked into Fitzsimmons’ office in 1997, he was two days late for his scheduled appointment. The former star had connected with Fitzsimmons thanks to a doctor who had received the lawyer’s name from a local judge. As recounted in Jeanne Marie Laskas’ book Concussion and in the movie with the same name, Webster’s life was unraveling. He had lost most, if not all, of his money. His marriage had ended in divorce. And something was wrong upstairs—he simply couldn’t focus or process thoughts normally. He repeatedly stunned himself with a Taser gun, super-glued his teeth, peed in his oven.

Fitzsimmons did much more than just file a disability claim with the NFL on Webster’s behalf in 1998. Webster often slept in his truck, so Fitzsimmons let him use his office basement to nap and clean up. Webster wrote Fitzsimmons dozens, maybe hundreds of letters, most incoherent but grateful. The pair, who were born just three days apart, grew close.

And good news came on May 8, 2000, when the league acknowledged that Webster had some sort of football-related brain injury—the first time the NFL had recognized such a finding. But even though five doctors (including one hired by the NFL) agreed on the diagnosis, the league pension board voted to award him only limited disability payments and refused to make the judgment retroactive to his 1991 retirement.

The difference amounted to more than $1 million—money that Webster, who had considered selling his Super Bowl rings to pay off debts, badly needed. Fitzsimmons filed an appeal, which the NFL’s pension fund denied. He then filed an appeal with the U.S. District Court in Baltimore, where the fund was based. They were still three years away from winning that case when Webster died of a heart attack on Sept. 24, 2002.

Enter Omalu, the Nigerian doctor who admittedly had no appreciation of either American football or Webster’s celebrity. Something simply didn’t feel right to him after the former athlete’s autopsy, so he reached out to Fitzsimmons for permission to study the brain. After conferring with Webster’s family, Fitzsimmons gave Omalu the go-ahead.

A pattern was emerging, and an $8-billion-a-year industry was under fire.

Months later, the forensic pathologist ultimately identified in Webster’s brain a progressive, degenerative disease linked to repetitive brain trauma. It was the first time an autopsy of a professional football player had confirmed the diagnosis of chronic traumatic encephalopathy, a condition associated with impaired judgment, impulse-control problems, aggression, depression and progressive dementia. In short, it was the first pathologically diagnosed case indicating a connection between football and brain damage.

Omalu published his findings in the July 2005 issue of Neurosurgery, which didn’t sit well with the NFL’s Mild Traumatic Brain Injury Committee. The committee—which critics say had long been trying to discredit research linking the sport and traumatic brain injuries—unsuccessfully demanded a retraction and continued to downplay the risks of the game. But the momentum and the science were shifting away from the league’s policy of denial.

Fitzsimmons and Omalu then teamed up with two neurosurgeons, Drs. Julian Bailes and Bob Cantu, and with former World Wrestling Entertainment competitor Chris Nowinski to form the Sports Legacy Group in 2006. “The goal was to obtain more brains and conduct more research,” Fitzsimmons says.

Their second confirmed CTE diagnosis was in the brain of retired Steelers offensive lineman Terry Long, who’d committed suicide at 45 by drinking antifreeze after other methods had failed. His brain resembled that of an elderly patient with advanced Alzheimer’s. Retired Eagles safety Andre Waters, who shot himself in November 2006 after having been denied disability by the NFL retirement plan despite numerous concussions, was the third former pro football player diagnosed with CTE. A pattern was emerging, and an $8-billion-a-year industry was under fire.

Fast forward to the present. >>
The NFL still keeps its distance from Fitzsimmons, Omalu and Bailes, who split from Nowinski and Cantu and formed the Brain Injury Research Institute in 2009.

“It’s competitive,” Fitzsimmons says of the institute’s work, which involves vying for brains against Boston University’s CTE Center (where Nowinski is now co-director). “And it’s hard to ask [for permission to study a brain].”

Given the sensitivities and high stakes involved, Fitzsimmons and others have begun to spearhead research studies to diagnose CTE in the living. Meanwhile, more athletes continue to be posthumously diagnosed. The list includes football players Junior Seau, Frank Gifford, Ken Stabler and Fred McNeill; hockey players Derek Boogaard and Bob Probert; and many others in a number of sports. The Boston group announced in September that they’d found CTE in the brain tissue of 96 percent of the former NFL players and in 79 percent of all other former football players (165 in total) they’ve studied.

Current and retired players have taken notice of the sobering statistics. Chris Borland, a promising San Francisco 49ers linebacker, surprised fans and his team when he retired last year at 24 over fears of developing CTE. But plenty of others, like retired Baltimore Ravens safety Ed Reed, have argued that the risks don’t outweigh the rewards of a lucrative NFL career.

For its part, the league has gradually taken steps to make the game safer, implementing a number of rule changes along with new protocols for how head injuries should be diagnosed and treated. And in March, Jeff Miller, the NFL’s senior vice president for health and safety, made headlines when he acknowledged the connection between football and CTE in front of a congressional committee—shortly after another NFL health official denied any confirmed link when questioned during Super Bowl week. (“This is at least the third time the NFL or one of its representatives have made a similar admission, and afterward they always seem to backtrack,” Fitzsimmons says of Miller’s statement. “I don’t think in the big scheme it means much.”)

“He is like the ultimate gladiator. You don’t want to face him in court.”

The NFL has also funded new field research and, without admitting any wrongdoing, it agreed to a settlement in August 2013 that could ultimately pay more than $1 billion in benefits to thousands of players with severe neurological conditions stemming from their pro careers.

“The ripple effect started with the pebble of Bob’s [Mike Webster] lawsuit,” says Dionne Koller, law professor and director of the UB School of Law’s Center for Sport and the Law. “And I would say history will show that this is far bigger than just the NFL.”

Koller says that all 50 states and the District of Columbia now have statutes that address concussions and how they should be managed in youth sports. And for good reason: The Centers for Disease Control estimates that athletes at all levels suffer between 1.6 and 3.8 million sports-and recreation-related concussions annually.

The problem is personal for Koller. Her son, Ethan, is a high-school hockey player who has suffered two on-ice concussions. One more, she says, and she’ll insist he quit the sport.

Millions of other soccer, football and hockey parents around the country are weighing the same risks. It’s a conversation that may not have unfolded in the way it has if Fitzsimmons hadn’t taken up Webster’s fight.

But he doesn’t want to be known solely as the CTE lawyer, the guy who took on the NFL. He’s just as proud of the fact that he successfully represented the victim in the civil proceedings of the Steubenville (Ohio) High School rape case, where two football players sexually assaulted an unconscious minor while bystanders videotaped evidence of the attack.

And he has no interest in being a big-city lawyer; Fitzsimmons says there is nothing better than practicing law in Wheeling with his sons, Rocky and Clayton. “He is like the ultimate gladiator,” Clayton says. “You don’t want to face him in court. He approaches every case, big or small, with a huge level of intensity.”

Clayton insists that success hasn’t changed his father, who has lived in the same house with his wife, Sunni, for more than 30 years. He still works long hours. He still wants his comfort foods—basics like grilled cheese sandwiches, oatmeal or omelets—for dinner. And he still loves being a lawyer.

“UB gave me a chance to be a lawyer and to practice, and I will never forget it,” Fitzsimmons says. “I’m happy if I’ve done some good, but at the end of the day, I just want someone to say, ‘Here’s a good man.’ Period.” 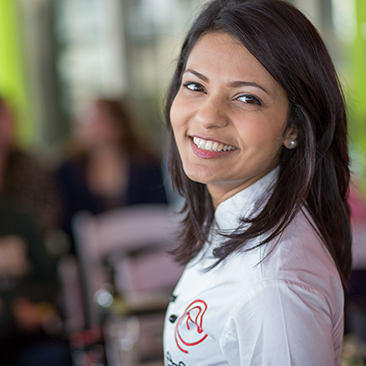 From Maryland to Mumbai, Nikita Gandhi, B.S. ’14, is charming the world as the winner of MasterChef India’s fourth season.