From Maryland to Mumbai, Nikita Gandhi, B.S. ’14, is charming the world as the winner of MasterChef India’s fourth season


She’s driving somewhere in India during our interview, and the telephone line keeps dropping. Each time she picks up again, she jumps right back into her story, unruffled. She chats brightly and with so much enthusiasm the phone practically vibrates with her energy.

Poise and persistence with a healthy helping of charm—the same qualities that got Nikita Gandhi, B.S. ’14, through 11 grueling weeks and 67 televised episodes of fierce culinary competition in front of millions of viewers to win the fourth season of MasterChef India in April 2015, snagging the record as the show’s youngest-ever finalist and a cool 10 million Indian rupees (about $150,000).

Now based in her native Abu Dhabi, United Arab Emirates, she proudly sports the winner’s gold-trimmed chef’s coat. She’s carving out a name for herself on the international culinary circuit as the creative power behind such dishes as a Passionfruit Amrakhand with White Chocolate Pistachio Ghari dessert—featured on the menu at upscale restaurant Signature by Sanjeev Kapoor, a chef and one of the season’s three judges, in Dubai, United Arab Emirates.

Just two years ago—before her fame, her 24,000 Instagram followers and her elbow-rubbing with gastronomic heavyweights—Gandhi was a 20-year-old graduate of UB’s Merrick School of Business, having followed her older sister, Shivani, to Baltimore after graduating from high school in Abu Dhabi. “I was looking at a business program,” Gandhi says. “I was one of those kids [confused] about what career path I wanted to follow, and for me, it was: ‘Do I do culinary or do I do business to be on the safer side?’ That’s how I ended up at UB.”

Choosing the “safer side” didn’t equate to nonchalance for Gandhi. She threw herself into her studies, often taking 15-18 credits at a time. But while she was intent on graduating early with her business administration degree, she never lost sight of her passion. She even founded a student organization called UBlicious. “The goal was to get people to cook healthy food and try not to eat [out in restaurants],” she explains. “What I noticed is that North Charles Street, with all these restaurants, was crowded with students going to buy lunch, and it also gets very expensive. I was trying … to get people to cook at home, to teach some easy recipes, to show them how much it costs to buy ingredients.” The group hosted a charity bake sale at one point and participated in a UB Block Party, but with Gandhi’s busy schedule—which included tutoring fellow students in both math and finance—the club fizzled.

In summer 2014 with her diploma in hand, Gandhi and her sister moved to New Jersey, where Shivani had landed a fellowship, and Gandhi looked to satisfy the culinary itch that had never subsided. “My passion to be in the kitchen all the time still hadn’t left,” she says. The sisters found an apartment accessible to New York City, and Gandhi—who has a penchant for pastries—applied for work in a variety of bakeries. “But because I lacked a culinary background, I wasn’t given a job,” she explains. “I kept applying, never gave up, but I didn’t find any luck with that.”

In the meantime, she attended the Carsten Institute of Cosmetology in New York City to learn how to apply makeup, a hobby of hers, and she launched a YouTube channel featuring her own cooking videos. At some point in October 2014, she saw a poster among her friends’ Facebook timelines about the fourth season of MasterChef India (just one of 50 or so international versions of the globally popular show) coming soon. “I thought I’d just give it a try,” she says, explaining she asked to be sent an application. “I took two days to fill out the application really well, with pictures [and] a portfolio of the food I’d made. At that point, it was just a dream. [From] that day, I [didn’t sleep] well because that dream kept coming to me that it might happen.”

But it didn’t just happen—certainly not overnight. Millions of people applied to participate in the show. And Gandhi was persistent. “I wanted to let [the producers] know that I [was living] abroad and that I’m a really passionate cook,” she says. “I kept calling them. … One day, someone answered the phone, and I had this whole conversation with one of the producers there.” The production team eventually asked Gandhi to send more photos of her culinary creations and invited her to schedule an hourlong Skype interview.

When that was followed by silence, she kept pushing. The producers responded with a request for videos of Gandhi while she cooked. “Finally—finally—they sent me an email saying, ‘We have our auditions coming up; pack your bags and come,’” she recalls. “They told me to pack for the next four or five months, ‘just in case you make it through.’ So I packed my life along with me, and this was when my sister … said, ‘I know you’re not coming back.’ And that’s what actually happened.” Eventually.

Gandhi attended the first round of auditions in mid-November 2014 in Ahmedabad, India, her parents’ hometown where her grandparents still live.

“I [had] never cooked meat in my life,” she says. “When I went to India for my audition, I [had planned on] learning how to cook meat from some of my friends who are meat eaters—at least learning the basics of how to cut it, how to clean it.” Call it fate at work or a stroke of luck, but at that first audition, Gandhi learned the fourth season would be entirely vegetarian, a first for MasterChef in any country and a boon for Gandhi, whose blog and social media accounts all fall under the umbrella title “The Veggie Fix.”

The next three rounds were an eight-hour drive away in Mumbai, with the fourth, televised round beginning about two months after Gandhi’s first audition. After 15 days of training—“chopping skills, recognizing spices and fruits and vegetables,” Gandhi explains—contestants were on their own.

“Whatever free time you have, they encourage us to study [and do] research. I always kept a lot of dishes ready in my mind. I had the base ready in my head, so when I saw the ingredients, I’d try to accommodate those ingredients into my base.” That’s how Gandhi’s winning Wintery Tart, the dish with which she clinched her spot in the televised portion of the competition, came to be; she knew she could execute a tart pastry, and she fit the ingredients she was dealt for that particular challenge—carrots, cinnamon, strawberries, pineapple, lentils and purple yam—into that pastry vision.

Gandhi calls the Wintery Tart her favorite recipe from the MasterChef kitchen. “It has been a blessing for me,” she writes in her blog. “It is that first recipe I made as a result of a Mystery Box challenge when we were in bootcamp (top 30) and got me the first apron (with my name on it) to enter the top 12, from where started the real journey.”

Gandhi’s flavor inspiration for her MasterChef efforts were primarily international, and her time in Baltimore contributed. “[Shivani and I] always had our food adventures and loved it every time,” she says of her years here. “My favorite restaurant that I frequented a lot was The Helmand [offering Afghan food in Mount Vernon]; I loved that place and I kept going back there. I tried to replicate some of those dishes at home, and they turned out pretty nice.”

She also speaks highly of the tacos at Woody’s Rum Bar and Island Grill in Fell’s Point. But what she’s most nostalgic for is the Inner Harbor. “I miss it,” she says. “It was so vibrant always. We used to go there for a walk or a run almost every day.”

Returning to the United States, although most likely not to Baltimore, may be in the cards for Gandhi. Last summer, she immersed herself in the culinary working world through an internship at Abu Dhabi’s upscale Beach Rotana hotel. “I learned a lot about food costing—how they cut down on costs and make their profits,” she says. “I learned a lot behind the scenes and from the chef.”

She’s also open to doing another internship elsewhere, possibly in the States. “My sister has really been insisting I come to America,” she explains. “They are doing some really crazy pastries [in the States] that probably aren’t even seen in Abu Dhabi.” Culinary school is also an option, and that, too, would lead her away from home. “I’d want to go abroad,” she says. “If I do pastry school, I’d want to go in France. I’d rather get the best experience where I can.”

For the time being, however, she’s riding the MasterChef wave, traveling and participating in culinary events, especially in India, in support of her big win. “I thought that if I go away to culinary school, I won’t be able to interact with the audience … or remain in the limelight in India, at least,” she says. “People in India are really excited and attend the events; they are showing a lot of support and love.”

When that wave begins to crest, she may turn her attention to blending her UB business degree and her passion for gastronomy. “I’ve always dreamt of opening a restaurant,” she says. “I’ve never dreamt of being a chef, which is kind of weird. I want a nice, exclusive boutique restaurant—not very big, not serving the masses, just a very few people [who] come in and get the best treatment. Now considering that I’ve learned so much from MasterChef and from my business degree, I can put that together and open a restaurant one day.”

We’ll be first in line. 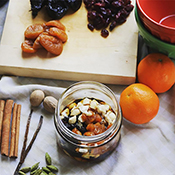 Dried apricots, cranberries, prunes, cashews and orange zest drowned in brandy. This is to be done at least a month prior to baking the Christmas cake and I am doing it quite late this year. Regardless, I’m super excited to bake this *once in a year* cake next week. #ChristmasWeek #holiday #baking; all photos and captions courtesy of Nikita Gandhi from her Instagram account, theveggiefix 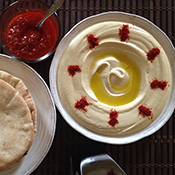 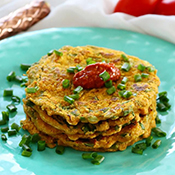 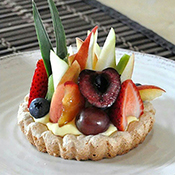 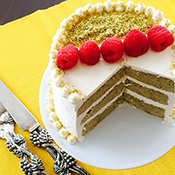 To all those who have highly requested for this pistachio cake recipe, here it is! 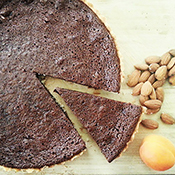 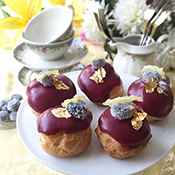 Mini choux pastry filled with lemon mousseline cream, topped with blueberry icing, sugared berries, lemon peel and gold leaf. This was to be posted yesterday itself but I didn’t wanna ruin the surprise for my dear friends who I was making it for 🙊 #home #baking #dessert #fun #nofilterneeded 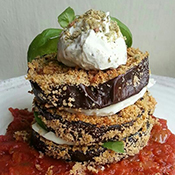 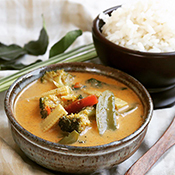 Cold #rainy days call for #comfortfood. And what’s more comforting than a warm spicy Thai Red Curry? 💦 This recipe is 100% vegetarian from my new #Thailand purchase (I did promise I’d put that cookbook to use, din’t I?) 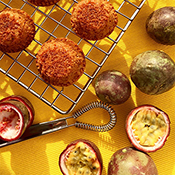 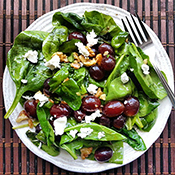 Spinach and Grape Salad with Walnuts and Goat Cheese #fridaylunch 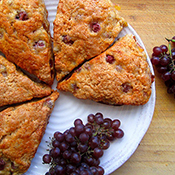