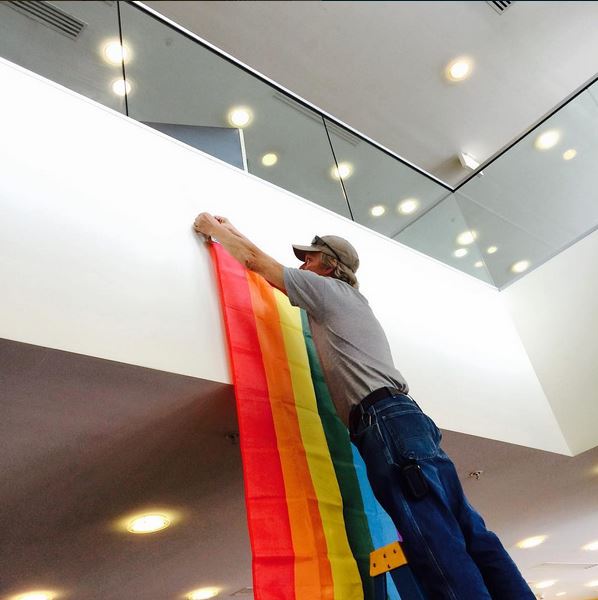 On Monday, June 13 at 12:30 p.m., the University community observed a moment of silence on Gordon Plaza. Community members stood as one to show sympathy and support for those who have been affected by the mass murder.

"UB stands with those who fight injustice, challenge intolerance, and combat hate," said Provost Darlene Smith. "We are committed to creating a campus that is open, accepting and supportive of all people."

Robert Steininger, the president of UB’s chapter of OUTLaw, wrote the following letter to the University of Baltimore and to the wider community after the June 12 mass shooting at an LGBT nightclub in Orlando, Florida. OUTLaw works to promote education and awareness about legal issues facing LGBTQ people and to promote acceptance of LGBTQ people.

To the University of Baltimore, to our city, and Nation,

My name is Robert Steininger and I am the President of OUT Law, the only LGBT club at the University of Baltimore.  I have spent days reflecting on the events that occurred this past Sunday at Pulse nightclub in Orlando.

This hateful act was committed against the LGBTQ+ community, Latinx community, and the American people.  This act of terrorism though does not come as a shock to us in these marginalized communities.

As a law student, I have studied closely how hate, bigotry, racism, misogyny, homophobia, and prejudice have been codified into our laws.  The man responsible for this tragedy did not need to turn to religion to excuse his hate; his hate has been celebrated time and again in the greater American story.

The murderer went into a gay bar, a place of community, safety and love, and used weapons designed specifically to kill as many people as quickly as possible.  We are lucky to live in Maryland, where this type of weapon is banned from being sold to individuals.  Yet our nation still struggles with addressing gun violence, and as long as weapons like this can be bought somewhere, it can be used anywhere.

Nevertheless, as the news comes out and his motives become clearer, we have to remind ourselves that his hate is not unique.  He entered this sanctuary and murdered my brothers and sisters. His last stand took place in the bathroom, coincidental but still poignant.  The hate that drove this man is the same hate that drives our elected officials to pass laws that ban my trans brothers and sisters from using bathrooms consistent with their gender identity without fear of legal repercussion.  This same hate killed Keyonna Blakeney, a transgender woman of color in Rockville this past April.

I call upon you all to fight against this hate wherever you see it, because your silence is your complicit approval of hate.  In the past, I would fear for my safety when out on the streets, concerned that my love might be the trigger that sets off hate and violence. In response to this fear, I hid my love.  I refuse to let fear control my actions any longer. I will not hide anymore, because the only way to conquer hate is with love.  I will walk proudly on the streets of Baltimore, the city that has adopted me as one of its own and show my love and I ask you to do the same.  Together, as a community, we can conquer fear and hatred.

I ask you to be honest with yourself, and those around you – Are you doing enough?  For me the answer is always no.  There is always more to do: be it educating your friends and families on accepting each other no matter our differences; to calling on your elected officials and asking them to stand for those who are marginalized and disenfranchised; or to create safe places that celebrate the diversity and beauty of all human life.  If we all strive to do more, to show love, kindness, and compassion, then this system of prejudice that began with the very inception of this country, even though it was meant to be built on equality and freedom, can now be advanced on those same values for all of us, no matter your race, sex, gender identity, or sexual orientation.  Let’s face this challenge proudly and together, as a community.  Stand with me, because I stand with you.