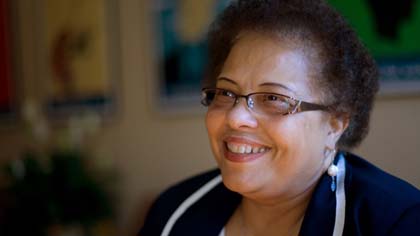 In addition to her academic expertise, Badejo brings more than 20 years of administrative and academic experiences to the University. As former dean of the College of Letters, Arts and Social Sciences at California State University, East Bay, she facilitated interdisciplinary collaboration among departments and established a faculty lecture series designed to encourage intellectual engagement between tenure-track and junior-level scholars. Badejo also served as a full professor of African and African Diaspora literatures and cultural histories at East Bay and held similar teaching roles at Kent State University, 1996-2008, and at the University of Louisville, 1991-96. She also was associate dean of curriculum and program development in the College of Arts and Sciences at Kent State University, 2007-08, and chair of its Department of Pan-African Studies, 1998-2007.

Among her many career highlights, Badejo was appointed an American Council on Education Fellow at the Harrisburg University of Science and Technology in 2006-07. In the early 1990s, she also was a Fulbright Senior Scholar at the University of Ghana’s Institute of African Studies, where she researched oral literacy as a framework for innovative K-12 development. She is a member of the American Council on Education, the Authors' Guild, the African Studies Association and the National Council for Black Studies. She is also a member of the Alpha Lambda Delta National Academic Honor Society, the Alpha Kappa Mu Honors Society, Kent State’s Phi Beta Delta Honor Society for International Scholars and several other professional associations. In 2011, Badejo was nominated to the Board of Directors of Maryland Humanities Council, and elected to the Board of Directors of the Council of Colleges of Arts and Sciences (CCAS).

A New York, N.Y., native, Badejo enjoys water aerobics; yoga; jazz, salsa and classical music; and cooking various international and regional dishes. She also enjoys an extensive network of family and friends along the East Coast and has deep roots in Baltimore.