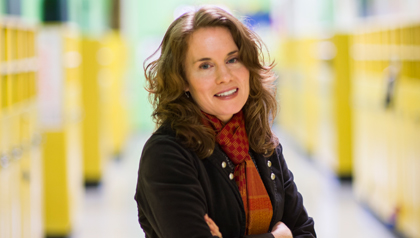 I started to write fiction while living in France, where I was pursuing a Master of Arts degree. My research (a comparative study of The Sound and the Fury and Cubism) was intellectually rewarding, but as I read and reread Faulkner's novel, I became less interested in my argument and more caught up in the beauty of the language and the characters, more seduced by the "vivid and continuous dream." I had just finished my B.A. in literature and had always approached literature from the outside. Now I wanted in.

There were many things I didn't know back then about writing and publishing. Sometimes, I miss those early days, when I would finish a story and mail it across the Atlantic to a "writing world" in which I played no part. With each new story, I try to get back to that place where I don't know anything.

Delury was named the winner of the 2019 Sue Kaufman Prize for First Fiction for her 2018 debut novel-in-stories, The Balcony, published by Little, Brown. Her fiction has appeared in publications including Narrative, The Southern Review, The Yale Review, and Glimmer Train. She has received a PEN/O. Henry Prize, the F. Scott Fitzgerald Story Award, a VCCA fellowship, and grants from the Maryland State Arts Council.