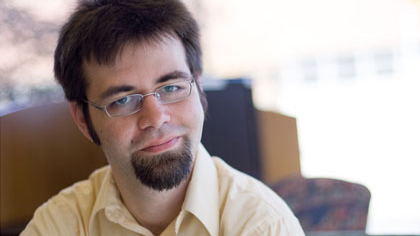 Michael Kiel has always been an avid reader, which some said in retrospect made librarianship an obvious career path, but his journey to the field was not a direct one. Though he ultimately obtained a B.A. in Linguistics from the University of Maryland, College Park, he has taken a number of courses in music, dance, math, English, history, engineering and all three of the primary sciences. Originally he pursued a degree in chemical engineering and then biochemistry before realizing that such a career would not be a good fit for his interests in public service. This has given him a very broad educational background touching on many disciplines, which is very helpful to him in providing reference service.

During graduate school, an internship at Stevenson University encouraged him to pursue a career in academic librarianship. He is an instructor for IDIS 110: Introduction to Information Literacy and is currently in charge of the Robert L. Bogomolny Library’s participation in the Federal Depository Library Program. Though new to the academic world, he was previously employed for more than 10 years by the Baltimore County Public Library and has also worked for an Internet-based bookseller.

Kiel is very interested in how individuals acquire knowledge and decide which sources to use and trust. He is also interested in issues related to transparency and access to information, which led to his focus on government documents and information related issues.