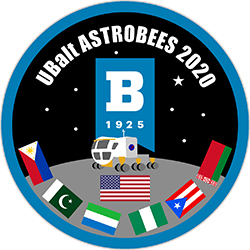 For the second year in a row, a team of University of Baltimore students have been invited to be part of NASA S.U.I.T.S. (Spacesuit User Interface Technologies for Students)—a challenge by the nation's space agency to design and create spacesuit information displays within augmented reality (AR) environments.

In 2019, a team from UBalt was among the challenge's finalists—and the only exclusively undergraduate team among all of the competing schools—to travel to the Johnson Space Center in Houston to present their technology to NASA engineers.

One year later, a second team, the Astrobees, will do the same. They're scheduled to be on site at the center in late April, accompanied by Profs. Giovanni Vincenti and Greg Walsh, to deliver their presentation and discuss its ideas and approaches to solving what NASA calls "key aspects" of the agency's upcoming Artemis mission to the moon.

"As NASA pursues Artemis—landing American astronauts on the Moon by 2024, the agency will accelerate investing in surface architecture and technology development," the agency says on its NASA SUITS website. "For exploration, it is essential that crew members on spacewalks are equipped with the appropriate human-autonomy enabling technologies necessary for the elevated demands of lunar surface exploration and extreme terrestrial access."

In plain language, the agency is looking for technological solutions—efficient, safe, and designed for non-engineers called in to fix a problem—for when things break on the lunar surface. A vehicle, a device, a shelter—anything can require a repair. The Astrobees are proposing an in-helmet, heads-up AR display for these jobs. Now, they're one of a select number of teams from across the United States to talk about their solutions, and show off their hardware and software, to the experts.

"Being part of this competition, for two years in a row, it shows the drive of our students to get results," Prof. Vincenti says. "These students, like so many students at UBalt, are absolutely unafraid to learn. They have a resilience that is really remarkable. I see them achieve things as a team, build on their own expertise, and keep moving. It's a highly diverse team that has put in an enormous number of hours to get to this point. No matter what, they will stay on the project until they have results."

Get to know the Astrobees.