Undergraduate research sheds light on the politics of race in colonial Maryland. 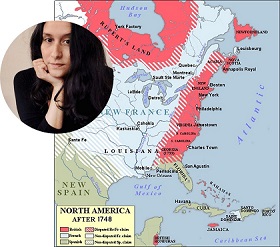 Creative Commons map showing possessions of Britain, France, and Spain in North America just before the French and Indian War (1754-63). The earlier War of Jenkins’ Ear between Britain and Spain, and the French and Indian War sparked fears of foreign invasion in the coastal colonies, including Maryland. History student Maite Horta found that colonial governors linked invasion scares to fears of slave insurrection when justifying an enlarged militia.

Recent incidents between police and African-American males remind historians that race-based fear has a long history in the United States. In the history program at UB, events that touch us today can become undergraduate research projects about our past.

In fall 2013, Professor Jeffrey Sawyer offered a seminar on the early history of crime and punishment in Maryland. Students selected their own research projects, and were encouraged by Dr. Sawyer to look at 18th century court records and legislation to find answers to their questions.

One student in the seminar, Maite Horta, became interested in the pattern of serious crime during the pre-Revolutionary era. She began an independent study with Dr. Sawyer in 2014, looking at the link between fears of a French invasion in Maryland during the Seven Year’s War, and fears of slave insurrection in the colony. Historian Mark Stegmaier had argued in the Maryland Historical Magazine that fear of slave insurrection was widespread in the region, but was this really the case? Evidence in the Proceedings of the Maryland General Assembly and other sources indicate that stoking of fears may have been a political ploy used in attempts to get funding to strengthen the Maryland militia.

Horta’s independent study was a great example of how digital history is energizing a new generation of students. The 18th century issues of the Maryland Gazette, criminal statistics, and the legislative archives have all been digitized for study online. Historic sites in Maryland, too, have made their stories available on the Internet. The slave conspiracy at Poplar Neck, for example, is recounted on Brandywine, MD’s Web site. Horta utilized all of these sources in addition to the key scholarship on the subject.

Now getting ready to graduate, Horta has taken advantage of most everything the UB history program has to offer students. She successfully completed three public history internships, including one in UB’s Special Collections department and another at the Enoch Pratt Library Special Collections. After graduation, she hopes to pursue a career in records management.

History students unearth the past of a local medical clinic. 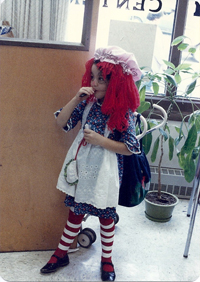 When  Elizabeth Nix, assistant professor, learned that the early days of the People’s Community Health Center—which opened a new site on Maryland Avenue just up the street from UB in 2011—were relatively unknown, she seized the opportunity to explore its origins as the People’s Free Medical Clinic in her history methods course, HIST 300: Exploring the Past.

Nix’s undergraduate students teamed up to interview physicians, patient advocates, lab technicians and mental health counselors—all volunteers—who had worked at the clinic in the 1970s. They conducted some interviews in person and others by phone and by Skype from Texas and California. At the time of the clinic’s origin, most of the interviewees had been young professionals dedicated to breaking down the barriers between patient and provider and to promoting their motto, “Health Care is a Right, Not a Privilege.”

Those who worked at the clinic donated one evening per week of free medical care to the Waverly community. The medical professionals reached consensus on all of their decisions and insisted that all patients had an advocate who accompanied them during their visits to help them understand their condition and the doctors’ instructions. Tuesday nights were “Women’s Nights,” reserved solely for treating women. The clinic has been credited with greatly reducing the rate of STDs in the Waverly community.

History student Beverly Bowers worked this past summer to combine and edit transcripts of the students’ interviews, nine of which have been submitted to Robert L. Bogomolny Library’s Special Collections. At the project’s completion, Langsdale’s collection will include 20 oral histories, photographs and articles.