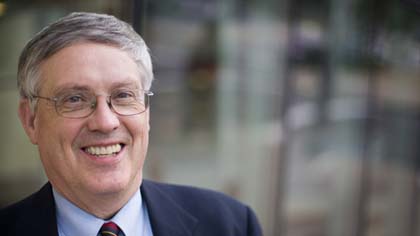 executive in residence
School of Public and International Affairs

From 1995 to 2003, I served as secretary of state of Maryland and was deeply involved at the state and national levels in election reform issues. I chaired Maryland's Special Committee on Voting Systems and Election Procedures, which led to landmark legislation and implementation of election reform measures in 2001. I also served on the Commission to Revise the Election Code, which modernized and recodified Maryland's election laws.

Willis wants voters to participate, he says in an installment of the UBalt Smart Talks video series; November 2012

I have conducted extensive research on Maryland political history, elections and demographics and have authored several publications and significant reports. I wrote Presidential Elections in Maryland, was a contributing author to Western Maryland: A Profile and co-authored the book, Maryland Government and Politics, by the University of Nebraska press as part of a series.

As an active member of the National Association of Secretaries of State, I served as regional vice president and on several election-related committees, including the Special Committee of Presidential Primaries, and as vice chair of the Elections and Voter Participation Committee and the Election Reform Task Force, created in response to issues raised during the 2000 presidential election. I also served on the Intergovernmental Affairs Subcommittee on Election Reform of the Council of State Governments.

In 2004, I was an invited participant in the Workshop on Electronic Votingconducted by the National Research Council. I also designed and supervised the grant awarded to the University of Baltimore by the U.S. Election Assistance Commission for the Help America Vote College Program, which successfully recruited, trained and placed college students as election judges and election assistants for the 2004 presidential general election.

I have been a frequent contributor to broadcast and print media and have testified on numerous occasions before federal and state legislative and executive committees. Before the passage of the Help America Vote Act, I was invited to present testimony to the U.S. Senate Governmental Affairs Committee and Committee on Commerce, Science and Technology and to the Congressional Black Caucus.

Since 1999, I have taught courses in American Public Policy, State and Local Government, and Maryland Government and Politics. I was previously an adjunct professor in the Economics and Business Administration Department of Western Maryland College, now McDaniel College.