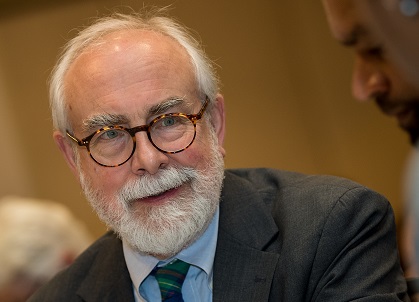 Joe Wood served as Senior Vice President for Academic Affairs and Provost at The University of Baltimore from 2009 to 2016, teaching in the School of Public and International Affairs and the Division of Legal, Ethical and Historical Studies until retirement in 2018. Trained as a geographer, he taught landscape and community history and courses on race and place as well as American government. In 2015, he originated UBalt’s Divided Baltimore course and continues to speak and write about the historical geography of racial segregation and structural racism in Baltimore. He is an active book reviewer for professional journals in geography, history, and architectural history and serves on the editorial board of the American Association of Geographers Review of Books .

Prior to coming to UBalt, he taught at the University of Nebraska at Omaha (1977-1987); George Mason University, where he was founding chair of the Department of Geography and Earth Systems Science and vice provost for academic affairs (1987-2000); and the University of Southern Maine, where he was provost and interim president (2000-2009). He is an elected fellow of the American Antiquarian Society and presently serves as a senior scholar at the American Geographical Society of New York.

Over his career, Joe has explored a range of scholarly topics from the New England village as invented tradition to the idea of the National Road in antebellum America to contemporary Vietnamese place-making in Northern Virginia. He was a visiting professor at South China Normal University in 1984 and served as an American Geographical Society travel program lecturer in Cambodia and Vietnam (where he was an Army combat engineer from 1970-1971), Canada, and the Great Lakes. Recent professional travel has included India, Cuba, Iran, and Qatar.

Over his career, he has been an officer or on the governing board of the American Association of Geographers, the American Geographical Society, and the Vernacular Architecture Forum, among other professional organizations. Community service has included chair of the Omaha Landmarks Heritage Preservation Commission, work with the DC Preservation League, chair of the Maine Center for the Prevention of Hate Violence, and board member of the Maine Philanthropy Center. Among recent community connections, Joe served as an OSI Community Fellow reviewer and on work groups for Associated Black Charities. He chaired The Journey Home board, Baltimore’s Continuum of Care that works to make homelessness rare and brief, from 2016 to 2018. He also served on the board of the Maryland Humanities Council from 2015 to 2018 and continues as a member of the Aspen Workgroup on Racial Equity in Baltimore.