Natasha Guynes, a student in the University of Baltimore's master's in public administration program, is a living testimony of UBalt's philosophy of applied learning with a focus on community. A survivor of a traumatic childhood and a person with a seemingly endless capacity for empathy and problem solving, Guynes has figured out how to apply her hard-won knowledge to help bring stability into the lives of other women. A nonprofit organization she started in Washington, D.C., the HER Resiliency Center, is helping vulnerable young women overcome huge challenges in their lives―women, who, like Guynes herself, are recognizing what it takes to overcome. 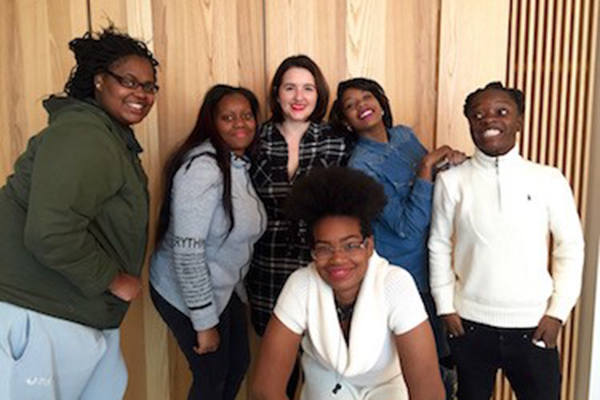 Natasha Guynes, top center, with women from the HER Resiliency Center.

Almost 17 years ago, Guynes left her home after growing up in Louisiana and Oklahoma, determined to get away from her divorced parents and their troubled lives. She had dreamed of entering politics, of being independent and successful, and she figured New York was a good destination with that goal in mind. But her money ran out in Washington, and with no real support from family or friends, she fell into habits she’d picked up as a teenager: self-medication through alcohol and drugs, paid for with sex work. She loved politics, lived in a political town, but had no way of creating that life. So she entered the world of escort services and descended into substance abuse. Along her journey, she saw a lot of women suffering in the same way. It was basic survival, in the midst of power and money.

Still, unlike so many other people who internalize their survival skills as the only way they can get through the day, Guynes continued to believe that a better future was out there, waiting for her.

"I never stopped giving myself permission to thrive," she says.

Time spent in a homeless shelter, along with a six-day hospital stay after a drug overdose, offered Guynes a stark picture of her future. She was still young, only 21, but was living among women who had spent years on the streets. She got help through a 12-step program, eventually deciding to go to college at Trinity University and serving internships with Americorps and the Democratic National Committee. Her natural organizational and political skills began to shine, and she went to work in Sen. Harry Reid's office, rising from staff assistant to office manager. She then secured senior level jobs for Sen. Ben Nelson and Sen. Brian Schatz, as well as a position on the Commission on Long Term Care.

Guynes is stoic but passionate about her life experiences. She doesn't shy away from any of it―she even says she is grateful for her quick decline, because it left her with only two choices: turn things around, or die.

It's a form of strength, Guynes says, of human resilience that deserves love and respect, not judgment. From that vantage point, she says, it's easy to distinguish what can help women who are struggling, and what will simply be an easy way of shifting blame and abdicating every person's responsibility to the greater good.

For this reason, Guynes says, when she decided to establish HER Resiliency Center as a place for women battling the odds, such as substance abuse, homelessness and trauma, she made sure that they are treated like people―not "cases," not "clients."

"You're not a case to manage―you're an individual," she says.

The barriers for women entering the program are purposefully low, she adds: they simply must identify as female, and be between the ages of 18 and 25.

Guynes and her staff visit women who are in jail in Washington, as well as assist those who want to begin the process of healing from their time in the streets. Her ability to solve problems has found its way into her job as leader of the center, and now she is setting up mentorships and jobs for the women in the program, recruiting an active, high-quality board of directors, and working on funding sources.

"In May of 2015, I told my boyfriend that I wanted to quit my job and start my own nonprofit for women," she says. "Ten months later, HER Resiliency Center was open."

Now, as she continues her classes at UBalt, she is settling in for the long haul: seeking grants, arranging services, and establishing standards such as trauma-informed certification for staff members. As president, she is strengthening the name of the center through outreach across the city and beyond.

"We are creating consistency, and we are giving the young women we serve a voice," she says. "We want to focus on preventing the problems that they experience. It's not easy."

Commuting from the District to Baltimore for her M.P.A. classes, she has time to think about the future of her organization, her place in it, and how her master's degree can provide a foundation for success.

"UBalt has surpassed my expectations," she says. "The professors are taking their real experiences to teach students. You are with people who are using what they've learned."

Now, she is beginning to imagine her nonprofit as a model that could be replicated in other cities. It will take a lot of effort and know-how, a sizable amount of which she will acquire on her way to her degree. She's also coming to a deeper understanding of how women, and men, fall into problems that overwhelm them and often lead to sharply diminished lives.

"You can't grow up if you're in that life, if that's all you've known," she says. "It's hard to develop emotionally, if your life has been impacted by trauma, especially complex trauma. It took me years of recovery before I could grow emotionally. Trauma really impacts the development of our brains."

She cites technology―the anonymity of the Internet, for example―as a reason why it can be a long, protracted process to recover from abuse.

"I don't want to indicate, at all, that everyone who experiences childhood abuse is later sexually exploited. However, there is a well-documented, direct connection between abuse and exploitation."

"Overall, it is technology that continues to drive exploitation," she says, explaining that technology enhances exploitation by reducing overhead costs for traffickers and increases predation by shielding illicit activities from law enforcement. It also further objectifies women by reducing them to a naked picture to peruse and buy.

If Guynes has one message for anyone facing any aspect of this struggle, it's this: make the system work for you.

"By 'the system,' I mean every resource you have―all of your connections, your mentors, and so on. Find people you respect and who are doing something that you like. And don't keep secrets that are killing you or someone you love. Find somebody safe to talk to. And get out―you can't grow if you're still stuck in there."