We stumbled upon an archive of old, unlabeled UB photos that prompted us to do a little sleuthing, and we need your help. Do you know the people pictured in this image? Do you know when or why this photo was taken? Fill us in: Contact the Office of Alumni Relations by email or at 410.837.6131.

And the Story Behind the Last Photo Is ...

The old photo featured in our last issue generated several responses; our thanks to everyone who weighed in. We hope you’ll share more stories about future photos.

From Kevin G. Robinson, J.D. ’87:
The picture is from the mid-1980s and was taken at a University of Baltimore alumni event on a river near Annapolis. The individual seated front center is [me]. [I] was working for the University of Baltimore Foundation at the time and attending UB Law School at night. For the last 25 years, [I have] been the business law professor at Mount Saint Mary’s University and a Pennsylvania and Maryland attorney based in Gettysburg, Pa. The individual standing behind [me] in the striped sweater is Sheldon Caplis [B.S. ’72], who was the head of the foundation. Seated two seats to the right of [me] is Kay Redington, who was the director of alumni relations.

From Margaret Matheny, former manager of the University of Baltimore Educational Foundation:
Kevin Robinson is in the center of the picture featured on page 24 of the current UB Magazine. He worked in the development office under Sheldon Caplis, and Kay Redington was the alumni director. It was probably around 1983 or 1984.

[I] don’t know where it was taken or why.

From Diane Aull, former UB budget analyst:
Not sure where this was taken, but I’m almost positive that the person standing with the striped, long-sleeve polo shirt is Sheldon Caplis. He was vice president for institutional advancement at UB, now regional director of community relations for [OneMain Financial]. This would have been taken sometime in the mid-’70s.

From Donna Romoser, M.A. ’83, who phoned in this information:
It was an alumni event in the 1980s, possibly at an alumnus’ home on the Severn; the man in the white sweater facing forward is Kevin Robinson, former director of institutional advancement. The man behind him in the striped sweater is Sheldon Caplis, former VP of the foundation.

Holly Gray, B.A. ’12, is creating change in a Baltimore neighborhood one cup of coffee at a time. 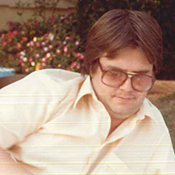 UB Around the Globe: A Ruin With a View