All it took to get Steven D. Cohen hooked on magic was a simple card trick. Since that moment, he has used magic to connect with others—from being the new kid at school to breaking the ice with students in his current role as assistant professor in the Yale Gordon College of Arts and Sciences’ Klein Family School of Communications Design. Never one to shy away from a crowd, he has performed his magic tricks in front of hundreds of people at parties and fundraisers. Below, he dives into his background as the “Magic Man.”

Q: How did you become interested in magic?
A: My grandfather was the one who introduced me to magic. He taught me my first card trick when I was about 10. I remember sitting at the kitchen table at his house and practicing card tricks with him over and over again. I was enthralled.

Q: What’s in your bag of tricks?
A: When I was younger, I seemingly would force blades through my arm, make audience members levitate and change a handkerchief into a magic wand. Nowadays I’m mainly a card magician. I am known for “coughing up” cards, making card predictions and causing cards to jump from one place to another.

Q: How did you get the nickname “Magic Man”?
A: When I was in eighth grade, I switched high schools. It was tough moving to a new school because I didn’t know anyone and a lot of people already had their friends. ... I used magic to make new friends and connect with other people. That’s how I first got the nickname “Magic Man.” It has stuck with me over the years.

Q: Do you follow any celebrity magicians?
A: I’m a huge David Copperfield fan. He’s such a cool guy because he’s not just a magician—he’s an entertainer. It’s the way he creates mystery, it’s the way he communicates and engages the audience. It’s the lights, it’s the dancing, it’s the music. It’s so exciting. It’s such a performance.

Q: Is there any relationship between magic and your career?
A: I perform in the classroom all the time—one of my students called my class a Cirque du Soleil performance because you never know what’s going to happen next. ... Magic is more than just an art form that is used to entertain; it’s also an art form that is used to excite and influence others. Communication is very ... similar; we can use the power of our voice to change people’s hearts and change people’s minds and ultimately make a positive impact in our ever-changing world.

Katie Watkins is a graduate student in the Publications Design program and a graduate assistant in the Office of University Relations.

You won’t believe your eyes: Become the audience for the tricky card maneuvers of Steven D. Cohen, assistant professor. 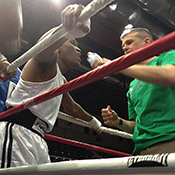