As a young social worker in New York City, Jessica Emerson, J.D. ’13, found her calling working with victims of sex trafficking who were trying to turn their lives around. “If you have an arrest for prostitution on your record,” Emerson says of these victims, “it can be very difficult to find employment or housing, to apply for student loans or to heal from trauma.”

After running into these and other legal roadblocks with her clients, Emerson decided to attend law school in the hope of more effectively helping them, and UB’s reputation for its strong program in public interest law was a key attraction. “After my first year of law school, I interned at the Legal Aid Society in New York City, and I was given the opportunity to craft a motion to vacate [convictions] on behalf of a ... survivor of trafficking. We were successful in vacating all three of her prostitution convictions,” she says of the process of removing convictions from victims’ records and reflecting that they never should have been convicted in the first place. “That summer really sold me, and working on behalf of these survivors was a perfect way to combine my social work background with the law.”

Increasingly, states are passing legislation to empower survivors of sex trafficking to have convictions vacated. In 2010, New York was the first state to enact such a law, with Maryland doing so in 2011; 22 states have since followed.

With legal supervision from the Women’s Law Center of Maryland, Emerson spent another internship researching how vacatur laws work and how best to train attorneys to implement them. “The University of Baltimore was integral to me being able to conceive of and grow this project into a legitimate legal [initiative in Maryland],” says Emerson, who is serving this year as a clinical teaching fellow in the UB School of Law’s Saul Ewing Civil Advocacy Clinic, continuing her work on the victim advocacy project she began during her time as a law student.

Maryland is still creating a structure to support its legislation, and Emerson has been instrumental in developing outreach materials and in training attorneys to understand the law and to advocate for survivors who seek to have their convictions vacated.

“We are doing a great disservice to victims of truly heinous crimes if we do not help them actually take back control of their lives.”

Emerson’s work has not gone unnoticed. Sen. Jeanne Shaheen (D-N.H.) heard a piece on National Public Radio in February about Emerson’s representation of a 24-year-old trafficking survivor. That led Shaheen to introduce an amendment to federal trafficking legislation—focused on financial incentives for remaining states to introduce similar legislation and to focus on the needs of criminalized trafficking survivors—that Congress passed last spring.

“It is just a matter of time before all states have passed vacatur legislation,” Emerson says. “There are great social services agencies working with survivors of trafficking, but legal services for these same individuals are sparse.

“We are doing a great disservice to victims of truly heinous crimes if we do not help them actually take back control of their lives,” she adds. “I am truly grateful to the people at the UB School of Law for allowing me the space I needed to find my voice.” 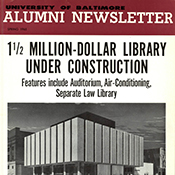 Michael Rodriguez, B.A. ’94, has gone full steam ahead with his maritime career for nearly 40 years.