MasterChef India winner Nikita Gandhi, B.S. ’14, returned to campus in October for an intimate cooking demonstration and to tell us more about her journey to clinching the title for the show’s fourth season. Watch her work her magic in this video.


Want to wow your friends and family? Try your hand at whipping up these three honey-based dishes that Gandhi prepared during the demonstration.


Blend everything together till it’s smooth. Pour into glasses and serve chilled.


Slice the baguette and lightly toast it.

Simmer together balsamic and honey on very low heat till reduced.

Cheese Wontons With Figs and Honey

On a wonton wrapper, place a teaspoon of filling, brush egg around the edges, fold and shape into wontons.

Heat oil in a frying pan. Fry the wontons till crispy and golden brown. Remove and drain excess oil on a paper towel.

Heat sugar and water together. Add honey and sesame seeds. Cook for an extra minute.


Behind the Scenes: MasterChef Timeline

The path that Nikita Gandhi, B.S. ’14, took to the MasterChef India title was long and laden with delicious challenges. Gandhi sent us some notes about the road to the grand finale. 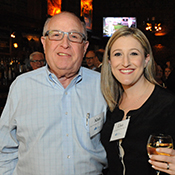 Say cheese! Check out the full gallery of photos from recent events.