From this particular office suite at the National Aquarium, you can watch guests gather under one of the building’s iconic glass pyramids to take in a stunning view of Baltimore's beloved downtown inlet of the bay. You can also look down on the USS Torsk submarine and a finger of harbor that laps the feet of Baltimore’s World Trade Center.

Sally Farley, associate professor in the Division of Applied Behavioral Sciences, and five undergraduate and graduate psychology students are in this suite today, huddled in a group, speaking softly about a plan that involves “coding” aquarium guests, using an app to collect data and reading from a script. This research team is devising a method to compare guests’ nonverbal cues with what they self-report as predictors of behavior.

To break that down for you: In a corner near the escalator leading up from the aquarium’s centerpiece Blacktip Reef exhibit, an educator stands by one of the aquarium's “Discovery Carts”; this one is dedicated to recycling and reducing the use of disposable plastics, specifically plastic water bottles. While the educator speaks about disposable bottles’ harmful effects on marine wildlife with guests who approach the cart, undercover UB researchers will be coding them, or taking note of nonverbal cues like nodding, body orientation and more. It’s no easy feat: “What’s tricky in this area of research—especially with nonverbal cues—is they’re so subtle,” Farley says. “You can’t code for frequency of smiling or eye contact in real time—that’s just too messy.” So it takes two coders to establish reliability, ensuring they’re both seeing the same things.

Another UB researcher, wearing a powder-blue polo shirt embroidered with the University logo, will approach listeners in the hope of interviewing them, from a script, about their attitudes toward recycling—how likely they might be to recycle for the rest of their lives, for example. In the meantime, additional team members are watching the interaction from an overlook on the second floor. As the guest who’s been interviewed approaches them on the natural path through the aquarium, they plant an empty water bottle on the floor, not far from a recycling bin. They’ll watch to determine if the visitor picks up the bottle and recycles it, the idea being that they’ll then compare the researchers’ data about the visitor’s nonverbal cues and self-reported attitudes via the survey to the person’s actual behavior. In other words, do guests do what they say they’d do when given an opportunity to recycle?

Why? It can inform the aquarium’s conservation messaging. Heather Doggett, director of guest engagement at the aquarium, sent out a call for a university partner to assist the aquarium with research. Sharon Glazer, professor and chair of the Division of Applied Behavioral Sciences in UB’s College of Arts and Sciences, responded, seeing opportunities for important, exciting faculty and student research. And a partnership, soon to be solidified through a memorandum of understanding between the University and the National Aquarium, grew out of conversation over coffee.

“It’s making us better educators by having access to the academic world and what’s happening on that side,” Doggett says. “It makes us more fluent in a language that hasn’t always been a part of environmental education in zoos and aquariums.” The data from the UB team’s studies can inform the aquarium’s approximately 40 educational talks a day—including microphone education talks and live animal encounters—and that doesn’t include conversations at Discovery Carts like the one that’s the subject of this summer’s research. The research can also help shape social media campaigns, email messaging and more.

“It would be nice to have more quantitative data that corresponds to the level of engagement of the audience—even more exciting if that level of engagement is likely to correspond to behavior,” Doggett explains about the motivation for the research. “To ensure that we’re engaging with [our audience] and that we’re being effective communicators, we can have supervisors go out and provide coaching to the staff person ... [and] make changes to programs to see more engagement, which we would hope is correlated to real behavior.” And that’s the correlation the UB researchers are focusing on this summer: whether increased engagement translates to actual behavior.

For UB’s part, Glazer says, “These kinds of studies have never been done anywhere in the world before.” And what she means is that in the past, research partnerships with zoos and aquariums have focused on the animals that live there, not on the humans that visit them. “The aquarium brings in well over one million guests each year—more people than the number attending football games, as Heather [Doggett] tells me—with its focal mission [being] to educate and change people’s conservation behaviors,” Glazer continues. “What makes the [UB-National Aquarium] collaboration unique is that for the first time ever, we are engaging in systematic applied psychological research to identify strategies to best reach out to guests, as well as the community at large, with conservation messaging in an effort to change conservation behaviors.”

“It’s always going to be important for the National Aquarium to understand how our audience thinks, feels and behaves around environmental issues.”

What’s more, thanks to support from a UB Foundation Fund for Excellence grant that has provided funding for student graduate assistants and for faculty members’ extracurricular work, students are gaining invaluable hands-on research, consultation and data-analysis practice with the mentorship of faculty, including Farley and Michael Frederick, an assistant professor in the same division.

“The impact of our engagement with the National Aquarium has reached farther than just the classroom,” Glazer adds. “Students have been acting as consultants of their own volition. It’s not always possible and easy to gain these experiences.” In fall 2015, students in Glazer’s graduate APPL 653: Consulting Skills Class laid the groundwork for continuing projects, guided by agreed-upon research goals with the National Aquarium, by developing reports related to the aquarium’s visitor profile and evaluations of best practices surrounding conservation campaign communications. Glazer says that Doggett reported many of the aquarium’s staff were “floored” by the students’ work.

Students and faculty aren’t the only ones conducting research at the National Aquarium. Jordan Watts, B.S. ’13, a graduate of the former Corporate Communication program, does so every day as part of his job as the aquarium’s digital product designer and strategist. We asked him to tell us more about his work behind the scenes at the city’s beloved attraction.

Q: What does a digital product designer and strategist do?

A: I apply user-centered design methods to produce a variety of digital experiences, from websites to apps. I’m involved in most steps of the digital design process, from the initial conceptual phase to launch. Along the way I’m responsible for requirements gathering, rapid prototyping, usability testing and coding, making sure that both user and business needs are being met by the experience.

Q: Can you briefly describe a day in your life at the aquarium?

A: Every day is different, which is both exciting and challenging. I could be updating content or layouts on aqua.org [the National Aquarium’s website], drafting wireframes for a new landing page or microsite, or conducting guerrilla user tests on our mobile app. I recently led a design sprint to produce a proof of concept for a possible conservation education campaign.

Q: How did your UB education prepare you, if at all, for what you’re doing now?

A: My time at UB laid the foundation for everything I do. The coursework was a great combination of theory and real-world projects that fleshed out practical skills like HTML and CSS, graphic, video and interaction design. I came away with a much better understanding of the digital space and how to contribute to it.

Q: What’s your favorite animal at the aquarium?

A: The peacock mantis shrimp. It’s stunning to look at, has incredibly sensitive eyes that can detect 10 times more colors than ours can, and packs an incredible punch; it can strike with the speed of a .52 caliber bullet.

“It’s always going to be important for the National Aquarium to understand how our audience thinks, feels and behaves around environmental issues,” Doggett says. “It’s just so important to our work and a keystone of making us better at what we do.” This summer at the aquarium, the students are talking with Farley about shifts in approach because they’ve lost sight of one of the interview subjects on her way up to the second floor and to the strategically planted water bottle—a lost opportunity to gather important data. Thankfully, this is just a dry run. “That’s what today is for,” says Chris Santos, an undergraduate psychology student, of the opportunity to work out the kinks so that hopefully the team can begin gathering usable data during its next research session.

Santos joined the project because he was interested in the topic and wanted to gain research experience. “I am not only getting a glimpse into the fieldwork but also some behind-the-scenes perspectives,” he continues. “These steps include formulating various parts of the experiment, writing and submitting research proposals and conducting the experiment itself.”

Deborah Carson, B.A. ’14, is stationed on the second floor, with Santos, in bottle-planting position. “Research opportunities are rare, especially [when it comes to] finding a professor willing to take you under their wing,” she says, echoing Santos. Carson, who is continuing her studies this fall in Towson University’s graduate Psychology program with a focus on experimental psychology, has been brought on board to assist the UB team thanks to a research grant Farley received. “This allows us to see what we’ve been learning in class, in textbooks, in lectures, play out in an applied setting,” Carson says. “And obviously, if we’re looking at conservation behaviors, it can only be good for the planet.”

Farley says the students’ work will make them more competitive for graduate school and may lead to publishing opportunities. “What’s different about these data is that—for publication in journals and conferences—not only would they be relevant for social science but they would be relevant for environmental science, too,” she explains. “The more meaningful the results end up being, the higher we would shoot.”

Doggett says that sharing information about the research at, say, a national conference could help other institutions “adjust how they’re teaching and interacting with folks.” And the results of the UB-National Aquarium partnership are just starting to reveal themselves “both in the students’ retention and engagement with their classwork and [in] new research for the social sciences and conservation psychology with the goal of measuring something that we can use in our practice,” she continues.

“We want it to inform other places that are aligned with a conservation mission. There’s some significantly unique work we’re doing. The reaction I usually get is, ‘Wow! I haven't heard of anyone else doing that.’” 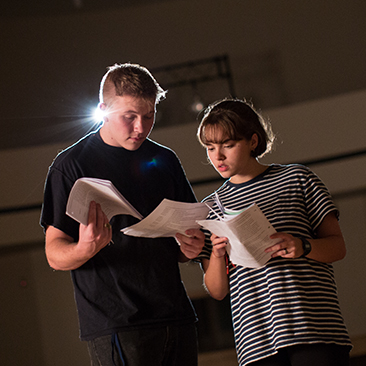