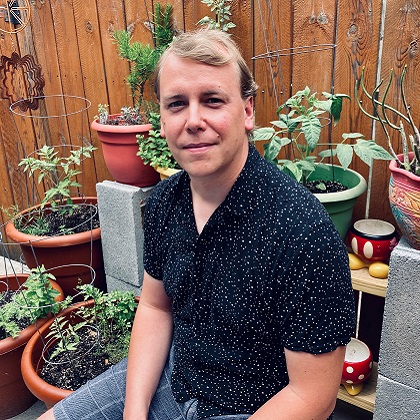 Ian’s music is inscrutable, warm, insistent, and performer-driven, and has been performed by ensembles and soloists in the US, UK, Germany, Denmark, and Israel. He performs his own work and others’ on piano, electric organ, and other instruments. He has performed in Baltimore at the Red Room, Wright Theater, EMP Collective, Copycat Building, Cork Factory, An die Musik!, MICA, War Memorial, Baltimore Theater Project, and several house and underground venues. His writing on rhetoric in new music and reviews of CDs and performances are published in TEMPO, and he has lectured at the American Musicological Society, American Studies Association, and universities in the US, UK, and Turkey. Ian studied with Chaya Czernowin, Steven Takasugi, and John Luther Adams at Harvard University.

Ian's first CD, Diligence, featuring long solo pieces, is out on Edition Wandelweiser Records (Germany) in June 2020. His CD Maintenance Hums, featuring chamber works, is out on Carrier Records (New York) in September 2020. He is writing an orchestra piece for the BBC Scottish Symphony Orchestra, to be premiered at the TECTONICS festival in Glasgow in May 2022.

Ian lives with his partner and son in Pigtown, and spends time in Rochester, N.Y., Orange County, Calif., and Istanbul, Turkey.