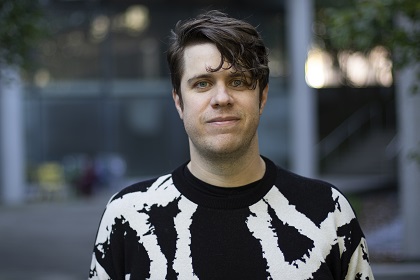 Kyle Meikle is assistant professor of communication and English in the Klein Family School of Communications Design, where he teaches courses on contemporary media and cultural theory in the Digital Communication, English, and Integrated Design programs. His research interests—often reflected in his courses—include adaptation, animation, media franchises, digital media, and streaming film and television. His articles and reviews have appeared in Adaptation (for which he also serves as Film Reviews Editor), the Journal of Adaptation in Film & Performance, Literature/Film Quarterly, Comedy Studies, Screen, and Wide Screen; his chapters on interactive adaptations, news media adaptations, and 8-bit adaptations have appeared in The Oxford Handbook of Adaptation Studies, The Routledge Companion to Adaptation, and Giochi Video: Performance, Spettacolo, Streaming, respectively. He is the author of Adaptations in the Franchise Era: 2001-16 (Bloomsbury, 2019), a history of adaptation’s relationship to streaming, fandom, gaming, and theater/theme parks in the 2000s and 2010s. And he is co-author, with Thomas Leitch, of the Oxford Bibliographies guide to adaptation.