Richard Dove, LL.B. ’62, spoke on “North Carolina’s Environment in the Eye of the Perfect Storm” in April at Catawba College in Salisbury, North Carolina.

Alvin Katz, B.S. ’63, was elected to the board of directors for the Education Foundation of Baltimore County Public Schools in July.

James Cusack Jr., B.S. ’65, was named a 2014 Influential Marylander by The Daily Record in March.

Dale R. Cathell, LL.B. ’68, published his memoir, Wading Through the Swamp: The Memoirs of a Bad Boy, in June.

Dennis C. Check, B.S. ’68, retired from Brody Transportation in September 2013 and now lives outside of Wilmington, North Carolina, with his wife, Carolyn.

Richard B. Jacobs, B.A. ’70, was recognized by Best Lawyers magazine as the 2013 Lawyer of the Year for family law mediation in Baltimore.

Stuart J. Silberg, B.S. ’71, was appointed to the board of directors of the University of Maryland St. Joseph Medical Center Foundation in February.

John H. Price Jr., J.D. ’73, was named a Volunteer of the Year by Senior Legal Services and the Bar Association of Baltimore City in May.

Leonard Moodispaw, J.D. ’77, received a Maryland International Business Leadership Award from Baltimore’s World Trade Center Institute in March and was a 2014 finalist for EY’s Maryland Entrepreneur of the Year honor.

M. Scot Kaufman, B.S. ’71, MBA ’78, was honored as a 2014 Outstanding Philanthropist at the Association of Fundraising Professionals Maryland Harford County Celebration of Philanthropy in April.

Jeffrey A. Koeppel, J.D. ’78, joined Kirk Halpin & Associates in Howard County, Maryland, in January as a corporate and securities attorney.

Phillip Korb, M.S. ’78, was appointed to the Maryland Board of Public Accountancy by Gov. Martin O’Malley in December 2013.

Donald C. Fry, J.D. ’80, became a member of the Baltimore-based Center Club’s board of governors in June.

John A. Roberts, J.D. ’81, was named a Volunteer of the Year by Senior Legal Services and the Bar Association of Baltimore City in May.

Arthur Flach, M.S. ’83, was appointed to the Maryland Board of Public Accountancy by Gov. Martin O’Malley in December 2013.

Kenneth D.L. Gaudreau, J.D. ’83, was recently appointed president of the executive board of the University of Maryland, Eastern Shore.

Leonard R. Raley, MBA ’83, president and chief executive officer of the University System of Maryland Foundation, was named the 2014 recipient of the CASE Commonfund Institutionally Related Foundation Award in February.

Audrey Carrion, J.D. ’84, was elected to the board of trustees for the Baltimore Community Foundation in May.

Susan Gainen, J.D. ’84, was named July’s Artist of the Month at the Art Shoppe at Midtown Global Market and the UCare Senior Center in Minneapolis, Minnesota.

Cynthia Raposo, J.D. ’84, was appointed to the board of directors of the Maryland Humanities Council.

Anita Sheckells, B.S. ’84, was named Woman of the Year by the Associated Builders and Contractors’ Baltimore Metro Chapter in February. She also was named to The Daily Record’s 2014 list of Maryland’s Top 100 Women, which recognizes honorees’ professional accomplishments and dedication to the city, in February.

Michael A. Duff, J.D. ’85, was elected president of the Delaware Valley Chapter of the Association of Corporate Counsel. He is also the senior vice president and general counsel for Penske Truck Leasing Co. in Reading, Pennsylvania.

David H. Stein, J.D. ’86, is listed in the 2015 edition of Best Lawyers in America for his work in the practice areas of bankruptcy and creditor-debtor rights/insolvency and reorganization law.

Wayne M. Willoughby, J.D. ’86, was appointed to the American Association for Justice’s Executive Committee and Board of Governors in August.

Kevin Cassidy, MBA ’87, was named director of operations for the Sisters of Bon Secours in Marriottsville, Maryland, in March.

Lucy Rutishauser, MBA ’87, was promoted to senior vice president of corporate finance and treasurer of Sinclair Broadcast Group in December 2013.

Kevin Cashen, MBA ’88, was a 2014 finalist for EY’s Maryland Entrepreneur of the Year honor.

David E. Carey, J.D. ’89, was sworn in as associate judge of the District Court of Maryland for Harford County in November 2013.

Patricia Denny, B.A. ’91, is a licensed massage therapist and director of the MBS Research Foundation, headquartered in Parkville, Maryland.

Oren Saltzman, J.D. ’85, LL.M. ’91, managing member of Adelberg, Rudow, Dorf & Hendler, was appointed to the board of trustees of the Equal Justice Council in March.

Robert Graybill, B.S. ’93, was a 2014 finalist for EY’s Maryland Entrepreneur of the Year honor.

Karen Pecora-Barbour, MBA ’93, was named one of The Daily Record’s 2014 Most Admired CEOs in September.

Timothy J. Tosten, M.P.A. ’93, was appointed the associate director for program and employee services at the National Institutes of Health in Bethesda, Maryland, in April.

Nancy Egan, J.D. ’94, was appointed director of government relations for the Maryland Insurance Agency in May.

Lawrence Greenberg, J.D. ’94, was named a 2014 Influential Marylander by The Daily Record in March.

Laurie Farrell, B.S. ’95, is president-elect of the board of directors of the Public Relations Society of America’s Maryland Chapter.

Michael Campbell, J.D. ’96, was elected president of the board of directors of the Child Center and Adult Services in Gaithersburg, Maryland, in October 2013.

Joshua C. Delaney, J.D. ’96, received the Hammergren-Dunlap Distinguished Service Award for Exemplary and Meritorious Service to Juvenile Justice and Detention Services from the National Partnership for Juvenile Services in October 2013.

William McComas, J.D. ’96, was named partner at the law firm of Bowie & Jensen in Towson, Maryland, in February.

Thomas J. Jones, J.D. ’99, is an international/operational law attorney at the Navy’s International and Operational Law Division at the Pentagon in Washington, D.C.

Ryan C. McLean, J.D. ’99, was appointed a public utility law judge by the Maryland Public Service Commission in May.

Robert W. Smith Jr., B.S. ’99, was named senior vice president of global human resources for Papa John’s in May and serves as a board member for the Kentucky Restaurant Association.

Anita Brightman, M.A. ’00, is vice president of the board of directors of the Public Relations Society of America’s Maryland Chapter.

Patricia M. Muhammad, J.D. ’00, published her scholarly paper, “The Trans-Atlantic Slave Trade: A Legacy Establishing a Case for International Reparations,” in the Columbia Journal of Race and Law in 2013.

Buthaina Shukri, M.S. ’00, was inducted into the Athletic Hall of Fame at Union College in Schenectady, New York, in November 2013.

Valerie Ervin, M.P.A. ’02, became the executive director of the Center for Working Families, the education and issue advocacy arm of the Working Families Party, a New York-based nonprofit group, in February.

Aryan Kushan, J.D. ’02, was appointed adjunct faculty/professorial lecturer of law at American University Washington College of Law in May.

Christopher Marasco, B.S. ’02, began a three-year term on the board of trustees of the Community Foundation of Howard County, Maryland, in October 2013.

Congratulations to the several alumni who have been named to The Daily Record’s 2014 VIP List, which recognizes Maryland leaders based on professional accomplishments, commitment to inspiring change in the community and accomplishments achieved prior to the age of 40.

Melissa McNair, J.D. ’02, recently became a partner in the firm of Budow and Noble in Bethesda, Maryland.

Timothy Tilghman, M.A. ’02, spoke on the bicentennial of the Battle of Caulk’s Field to the Kent Community Breakfast Group in Chestertown, Maryland, in August.

Renee Lane-Kunz, J.D. ’03, was named president of the Association of Legal Administrators’ Maryland Chapter in May.

Michelle A. Brady, J.D. ’04, is an international training adviser with the International Development Law Organization and is working to help build capacity and empower Afghan justice professionals to institutionalize rule of law and criminal justice reforms.

Susan Hussey, J.D. ’05, joined the University of Maryland St. Joseph Medical Center as vice president of human resources in May.

Kathleen Lyon, J.D. ’05, was named a 2014 Influential Marylander by The Daily Record in March.

Carol Persson, LL.M. ’05, was promoted to member at Adelberg, Rudow, Dorf & Hendler in Baltimore in July.

Gregory E. Rapisarda, J.D. ’05, was elected partner at Saul Ewing in January. He works in the firm’s Baltimore office.

Bonnie J. Schupp, D.C.D. ’05, had her artwork installed in the lobby of the Johns Hopkins Bayview Alpha Commons building in Baltimore in 2013.

Bradley A. Marcus, J.D. ’06, was promoted to counsel at BuckleySandler in Washington, D.C., in January.

Maria McKenna, J.D. ’07, was selected as a Leading Lawyer in the May 2014 issue of What’s Up! Annapolis magazine.

Helen Smith, J.D. ’03, LL.M. ’07, joined Fedder and Garten Professional Association in Baltimore as a shareholder in the firm’s estate planning group in May.

Lisa Sparks, B.A. ’05, J.D. ’07, received an Adjunct Faculty Award from the University of Baltimore School of Law in April.

Daniel Weimer, B.S. ’07, was promoted to a manager in the audit department at Arthur Bell in Hunt Valley, Maryland.

Jin Luo, B.S. ’02, MBA ’10, was promoted to assistant manager of taxes and corporate disbursements at the New York Life Insurance Co. in February.

Nicole Soraruf, J.D. ’10, joined Ober|Kaler in Baltimore as an associate in the finance group in July.

Susan Francis, J.D. ’11, was promoted to deputy director at the Maryland Volunteer Lawyers Service in Baltimore in May.

Victoria Garcia, B.A. ’09, M.P.A. ’11, was appointed as the new property manager of the Morris H. Blum Senior Apartments by the Housing Authority of Annapolis, Maryland, in December 2013.

Alumni Serve on State Bar Association Board of Governors

Alumni Serve on State Bar Association Board of Governors

The 2014-15 Maryland State Bar Association Board of Governors roster again includes a number of UB alumni.

Christine Lincoln, M.F.A. ’11, was named the 2014 Poet Laureate for York, Pennsylvania, in March.

Sean O’Donnell, M.A. ’11, was commissioned as second lieutenant in the Maryland Army National Guard in June.

Phillip Dawalt Jr., D.P.A. ’12, was promoted to full professor at Ivy Tech Community College in Anderson, Indiana, in May 2013.

Gregg H. Mosson, J.D. ’12, completed his first year as an associate attorney at Lebau & Neuworth, where he practices plaintiff-side employment law and Social Security disability. He also published an article on “Maryland’s Lien for Unpaid Wages Law” in a special 2014 issue of the Maryland Association of Justice’s Trial Reporter.

Aditya Raval, MBA ’12, joined GKV in Baltimore as a digital analyst in November 2013.

CarlaJean Valluzzi, M.F.A. ’13, was one of 78 poets from seven countries selected to participate in the Found Poetry Review’s OULIPOST project in April.

Brett A. Weil, M.S. ’13, was promoted to vice president at greeNEWit in Columbia, Maryland, in February.

Dustin Fisher, M.F.A ’14, published his first book, Daddy Issues: Tales of an Average Guy and His Daughter Learning How to Raise Each Other, in May. 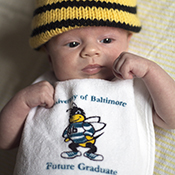 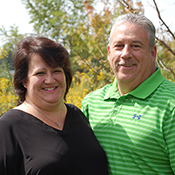 Highlighted Class Note: A Match Made at UB