Everyone’s path is different, but it’s fair to say that some are closer to obstacle courses.

It seemed like the way was paved for Ufuoma Agarin, J.D. ‘21. Intelligent and ambitious, she completed high school at 16, and graduated from Coppin State University with a B.A. in Political Science (and the highest G.P.A. in her program) before the age of 19. But in less than two years, everything had gone sideways.

Though she secured a full ride to The University of Baltimore School of Law, and signed a lease on her very first apartment, Ufuoma was still just a teenager; what’s more, she was a teenager with some very adult burdens. Just weeks into her first term, both her father and grandmother were hospitalized, leaving Ufuoma to serve as the primary caregiver for her younger siblings. She gladly took on a few odd jobs to help ease the burden for her family while her father recuperated, but the constraints on her time and focus were beginning to take a toll on her studies. And then the unthinkable happened. 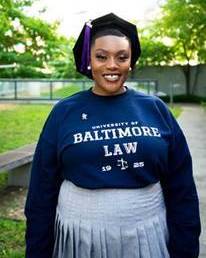 "Graduating from college at 18, I believed I had a head start on life. The world had so much to offer me based on the efforts I had put forth. I was invincible, and truly believed that nothing could stop me. My purpose was my motivation. I would succeed at everything, so that I could be my family’s savior. I was an independent law school student with a full scholarship who had just leased her first apartment. In my mind, nothing substantial could ever present itself as a blockage to my success—that is, unless I allowed it. I was unstoppable until I wasn’t."

Ufuoma was robbed and lost the entirety of her savings, all she had to support herself. She was now also facing eviction, overdue on bills, without electricity or food, and in a constant state of worry over unreliable transportation that was her lifeline to school and work.

During this period, she found some measure of relief from UBalt’s Campus Pantry and other Student Support Services, but what she really needed was time—time to get into a groove. Many of her peers encouraged her to defer her exams, given the incredible circumstances she was faced with, but Ufuoma was determined to finish strong.

She soldiered on that term and just as a light appeared at the end of the tunnel, tragedy struck again. With her semester’s courses completed, Ufuoma was preparing for final exams when, she learned her aunt suddenly passed away; it was only about a week later, on the night before her oral argument, she received word her grandmother finally succumbed to her terminal illness. These final blows proved to be too much for Ufuoma, who wound up being dismissed from the School of Law for poor performance. She did not return to the University of Baltimore the following year.

During her unintentional "gap year," this brave and resilient woman focused on regaining some semblance of order in her life outside law school. She realized she spent so much time helping others, that she had no time left to prioritize herself. Once her family regained its bearings, Ufuoma made the decision to put herself—and her self care—first, and set out to clear the path to her emotional, financial and personal freedom. By the time the Fall 2018 semester began, she had written a compelling and heartfelt case for reinstatement into the Baltimore Law program that was accepted, and she was on her way again. A fresh start, though still an uphill climb. 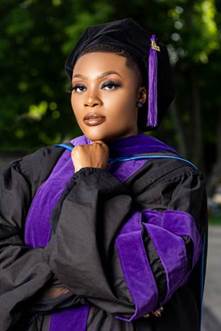 "Through those times, I learned many life lessons. What was the most significant? The recurring one that taught me I have a choice. I do not have to move mountains out of the way. I do not have to break down blockades. In strategy, I can choose to walk around, to walk away, to sit tight and just wait, or to not do. I finally understood that life presents a host of obstacles, but it is up to me to decide what deserves my energy and focus. I have a choice throughout the journey of challenges. I have a choice to engage or not to engage, to try or not to try, to fight or not to fight. Life is out of my control to fix, but I still have choices. Falling from grace, picking up the pieces, learning my lessons and starting again: I know I can choose me."

Generous support from the UBalt Law Scholarship Fund and other federal programs helped make her return to academia financially feasible, but Ufuoma was houseless during that first semester back. She did some work for the Office of Disability and Access Services as a note taker, which put a bit of money in her pocket, and also received informal (but greatly appreciated) support in the form of discounted meals from the staff at Jay’s Catering, a favorite UBalt haunt, where she worked and studied most days. When she wasn’t staying with friends, Ufuoma lived out of her car and kept a suitcase handy, hidden away on campus, so she could change and freshen up before classes. And even though just as she finally secured a new residence, and her car was stolen with her belongings in it, she persisted thanks to her renewed sense of self-determination, balanced by a healthy support system, on-campus and off.

By the end of her first year back, she secured an externship as a Summer Law Clerk with the Maryland Office of the Public Defender and served as the 2L and 3L Student Bar Association Representative. But Ufuoma says that she wasn’t one for a “traditional” law school track, and before the COVID-19 pandemic struck, she realized both her talent (and her interests) lay where law and politics intersect with communications and policy. She contributed as a commentator for FOX-45 and Maryland Matters News; she was Data & Research Manager for Campaign Zero, providing policy research on sentencing guidelines and mandatory minimums (work she continues doing as a passion project); and even served as the Director of Policy and Communications for the 2nd District on the Baltimore City Council. 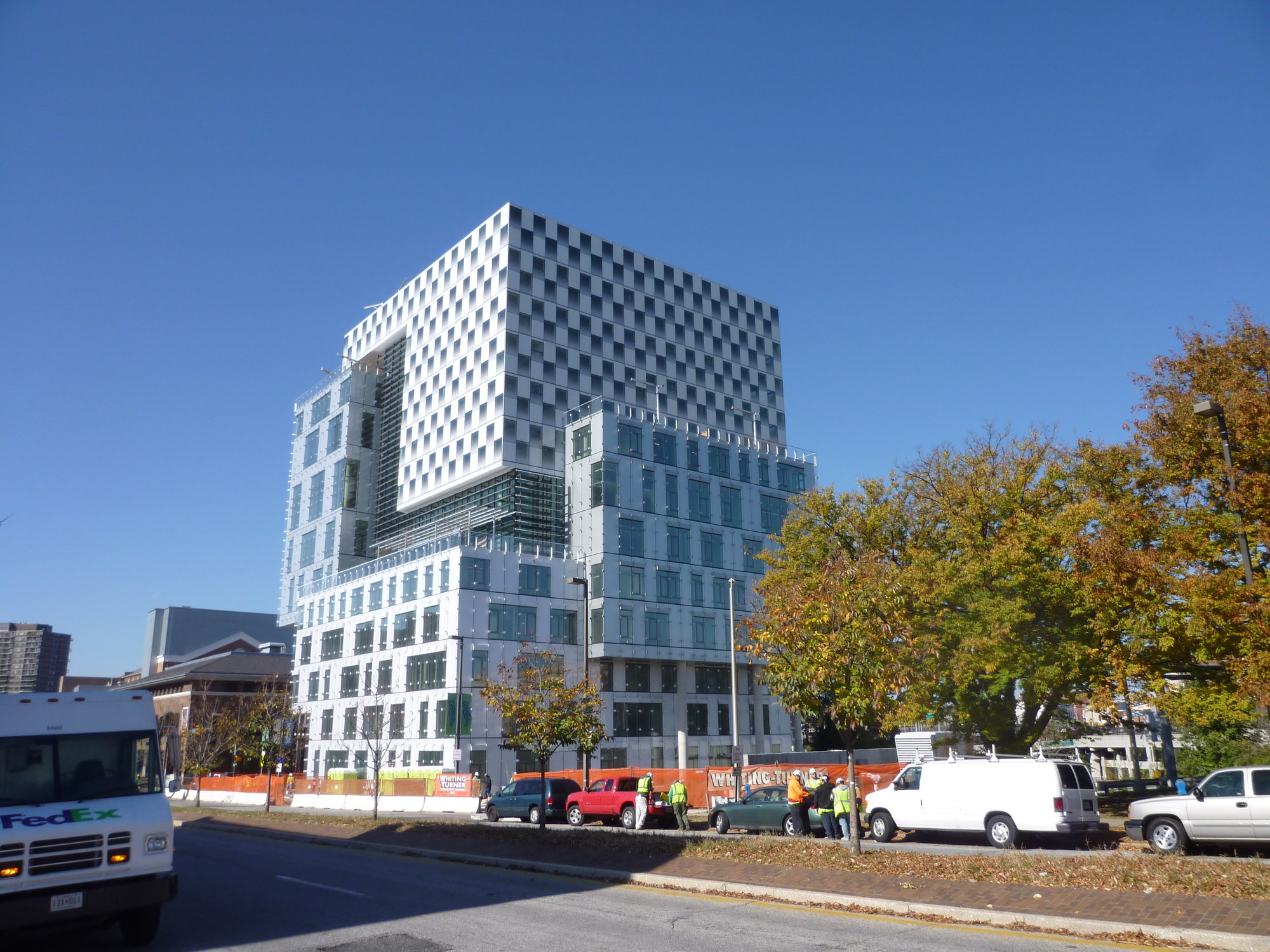 While COVID put a strain on her finances, it never dulled her resilience or spirit. She once again reached out to the UBalt community and they answered the call, with support from a CARES Grant, as well as the University of Baltimore Foundation’s Student Emergency Assistance Fund, to get her to the finish line. And last June, Ufuoma Agarin completed her J.D. and graduated, now more determined than ever—not just to succeed, but to give back something of herself again.

In addition to caring for her family, she’s volunteered for numerous organizations along her journey. But amidst the COVID-19 pandemic, she launched The Initiative—a project that provides financial aid, support, and resource-brokering services to individuals and families across the world who are in dire straits—on her own terms. Late last year, she partnered with other community organizations to ensure people in Baltimore had access to necessary resources during the holiday season, and she started a support fund for a family in need in West Africa, as well as providing them with resource references.

While Ufuoma told us “The world had so much to offer me based on the efforts I had put forth,” it’s clear that it’s actually she who is offering so much to the world, through her deeds, actions and her inspiring story of perseverance despite seemingly insurmountable hurdles.

And even after having gone off the beaten path, Ufuoma is still pacing ahead for her age group. Recently having turned 26, she kicked off 2022 as the newest Legislative Director for the Senate Delegation of the Maryland General Assembly. We’d say she’s definitely on the right track.