THERE AND BACK AGAIN
WITH KONDWANI FIDEL 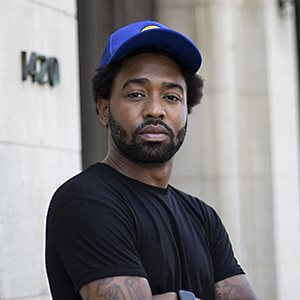 It would be hard not to describe Kondwani Fidel, M.F.A. '20, as successful.

In 2018, when we profiled him as a student, he was already known—famous, even, in certain circles—as a poet, writer and spoken word artist. His storytelling resonated deeply with people in his community and from neighborhoods like his who came from the same background, people who appreciated Kondwani's lyrical gift for framing their shared experiences in an impactful way.

While at The University of Baltimore, he found his style of storytelling also resonated with his classmates. Classmates in the Creative Writing & Publishing Arts program who were nothing like him—who almost certainly hadn't lived through anything as turbulent as his own origin story—connected with him over meter, structure, syntax and symbolism.

He also found his words resonated with his contemporaries—authors, activists and academics whom he admired.

"All of a sudden, professors, teachers, people in my classes were mentioning my work back to me. They were pulling things out of my work I didn't even know existed. And people from all over—young, old; white, Black; from America, or not; didn't matter—were telling me my storytelling helped them get a better view of the world. But the feedback that meant the most to me was when I was going into schools, and students would come up and tell me, 'I thought I hated reading, but your book is the first book that I read cover to cover.'"

And that's when he realized his words resonated with Baltimore itself. 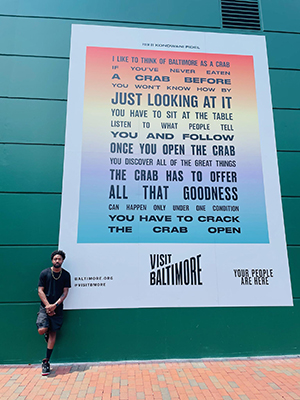 Since that 2018 profile, Kondwani Fidel has become a de facto spokesperson for Charm City. As the lead copywriter for Visit Baltimore's most recent tourism and brand campaign, his original poem "Beneath the Shell" was featured in its 2020 Super Bowl commercial, the words of which now grace a giant banner on the side of the National Aquarium, right smack in the middle of in the Inner Harbor. He was hand picked by the Orioles to craft an original work for Opening Day 2021, which resulted in "A New Song," a powerful rallying cry for both baseball and Baltimore.

He was recently a guest on the nationally syndicated The Tamron Hall Show with fellow local artists, UBalt professor D. Watkins, B.A. '09, M.F.A. '14, and renowned photographer Devin Allen, to promote the city's cultural resurgence. He's been named to "Best of Baltimore" lists multiple times and graced the cover of Baltimore Magazine. Heck, he even had his own flavor at local sweet spot The Charmery. (For those interested, "Kondwani's Mud" was a chocolate and caramel base, with sugar cone pieces throughout.)

On top of all that, during the COVID-19 pandemic, he released an album— The Mud Was Made For Us —"a 9-track poetry EP and sultry, soul-baring open letter about growing up in East Baltimore" (Baltimore Magazine); and last fall, he inked his first publishing deal, wrote and released The Antiracist: How to Start the Conversation About Race and Take Action in the span of two weeks!

So again, it would be hard not to describe Kondwani Fidel as successful, but he isn't ready to rest on his laurels, either. You see, he attributes a great deal of his success to his education—not just what he learned, but who he learned from and who he learned with.

The 28-year-old credits his time at Virginia State University, one of just over 100 historically black colleges and universities in the country, as the place that set him on his current trajectory. There, he was exposed to the breadth of diversity within the Black experience in America.

"I didn't know what an HBCU was until I was literally on the campus of one," he recalls. "I met people from completely different backgrounds than mine. I didn't know what life was like for middle class or upper-middle class Black people. But we shared stories about our upbringing and childhoods, and the different things we're all into, and I realized the world is much bigger than Baltimore when it comes to being Black."

It was also there that he met the man who would inspire him, not just to become a writer, but steer him closer to the path he's on now.

"My English professor, Arnold Westbrook, is the reason I started reading, which ultimately, is the reason I became a writer. He tries to brush it off when I credit him by saying, 'I'm just doing my job, just doing what somebody did for me.' But that energy has always stuck with me and I just always felt like that's what I'm here for: to do for somebody what he did for me. I want to work with young, hungry students (like I once was) and I want to help them. Not that they need my help to be anything in life, but I want to be part of that process."

That desire eventually led him to seek out The University of Baltimore, but that path wasn't an obvious one. Despite a positive experience getting his B.A. in 2015, Kondwani swore off the idea of continuing education. That is until he happened to catch author, filmmaker and Morgan State University professor MK Asante on an episode of The Breakfast Club.

"This was my first time seeing someone that shared the same views as me and dressed like me, but taught at an HBCU. It changed the way that I viewed academia and being a professor. MK inspired me to flirt with the idea, but D. drove it home for me that I could be a professor too."

He is, of course, referring to his former professor, mentor and now close friend, D. Watkins. The fellow Baltimorean took Kondwani under his wing during his time as a student at UBalt.

"I already admired his work, but I respected how engaged he was with his students, and how much they loved him," he says. 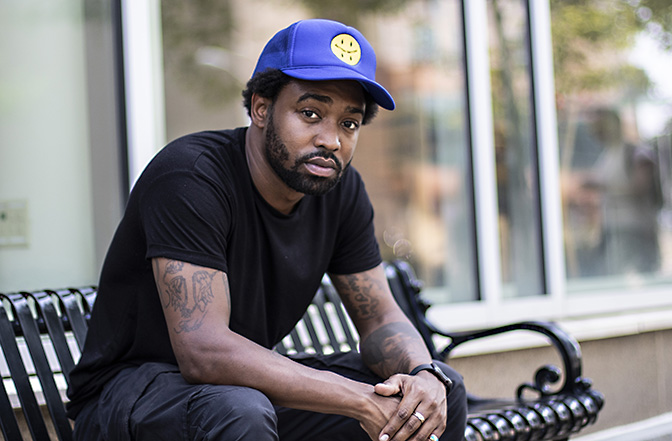 And all this representation became inspiration. Kondwani found personal and professional growth in spaces where he's felt seen and accepted, but he's also found it in those places he didn"t.

"Not every room that you're in is going to be comfortable. Just take from that what it has to offer. Some of that experience you can utilize; some you can't."

Now, he's found himself in a position to pay it forward—at an HBCU, no less! Kondwani just announced he has accepted a teaching position in the English department at Coppin State University. He's finally at a point where he can focus on inspiring others on their own journeys, in part by creating a learning environment where burgeoning writers can be seen, accepted and heard, themselves.

"The most rewarding part of my journey is just being on it and being given room to grow. I've grown into a better Kondwani—a better brother, a better uncle, a better friend. And because I've been able to grow, I'm able to help the people around me grow. Whether it's students, friends, or strangers who find my work through the internet and engage, if I can share my growth with them, maybe they can learn from it and grow too."

Learn more about Kondwani's past, present and future projects at kondwanifidel.com.