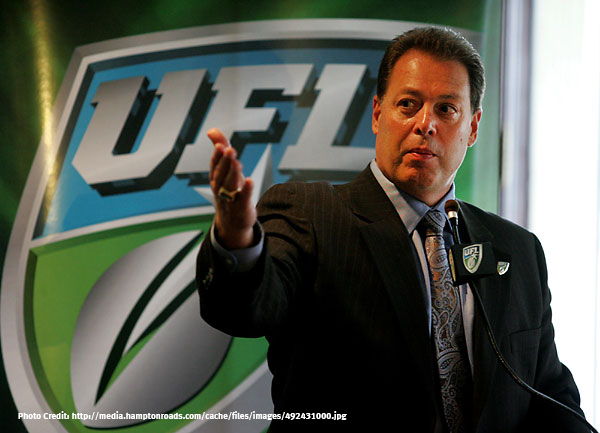 Join Murray Dalziel, dean of the Merrick School of Business as he talks with Jim Speros about his career, businesses and life lessons.

James L. Speros is an accomplished entrepreneur and former professional football coach and owner, whose background includes several successful ventures in the sports entertainment, technology, hospitality and business industries. He has considerable experience in the formation and management of startup enterprises in a number of industries. Many of these companies became recognized leaders in their respective markets.

Mr. Speros is Chairman and CEO of Speros Ventures, LLC, a company comprised of Mr. Speros’s myriad of hospitality, real estate, technology and sports holdings. He is the owner and founder of Velocity Five Sports Restaurant, an upscale sports restaurant and catering chain with locations in Centreville, Falls Church, Arlington, Lansdowne and Potomac Falls, VA. He is also sole owner and operator of Velocity Wings in Purcellville, VA. The Washington Post recognized Velocity Five as “the best sports restaurant to open in Northern Virginia in years…” In 2009, Velocity Five was recognized as one of the Top 5 New Franchises among 250 nominees by Franchise Edge, a leading developer of franchises nationwide.

He served as Chairman, President and CEO of Chalk, Inc., a publicly traded company, from 2005 through 2008. He served on the Board of Directors from 2000 through 2008. Chalk, an industry leader in mobile learning management systems was sold to Research in Motion (RIM)/Blackberry in January of 2009. He also served for twelve years (1998-2010) as member of the Board of Directors of Braintech, Inc., a publicly traded vision guided robotics company.

Prior to his affiliation with Chalk, Mr. Speros was President and Chief Executive Officer of Sideware Systems, Inc., a customer relationship management software company which traded publicly in the United States and Canada. Under Mr. Speros’ leadership, the company had twelve offices across North America and reached a market capitalization of $1.8 billion dollars. Their customer list included several Fortune 500 companies.

Mr. Speros is a founding partner, owner and served as Vice Chairman of National Capital Golf Ventures, LLC, a privately held golf and real estate development company with properties in the Mid Atlantic.

He served as President of Champions Sports, Inc., a publicly traded restaurant corporation, from 1989 to 1993. Champion’s Sports had 37 restaurant locations nationwide before being sold to the Marriott Corporation in 1993.

From 1993 to 1997 Mr. Speros was the President and Owner of two professional football franchises, The Baltimore Stallions and the Montreal Alouettes of the Canadian Football League. He also served as Vice Chairman of the Canadian Football League and Chairman of its U.S. Expansion Committee. In 1995 Mr. Speros reached the pinnacle of his CFL football career by winning the Grey Cup Championship – the first and only U.S. team in the history of the 125 year old league to accomplish this feat.

In 1994, his Baltimore Stallions were honored by fellow CFL owners as its “Franchise of the Year” in recognition of its business performance in addition to reaching the Grey Cup that season.

Prior to his involvement in the CFL, Mr. Speros served five years in the National Football League, coaching with the Washington Redskins and the Buffalo Bills. While with the Redskins he was a member of the 1982 Super Bowl Champions and the 1983 NFC Champions.

Mr. Speros is involved with several charities which include the JB Awards, which benefits the Special Olympics for the Washington, D.C. area; The Washington, D.C.’s Sports’ Alliance’s Sneaker Ball, and was Chairman of the 2007 gala for the Potomac Ridge Behavioral Health System (a subsidiary of Adventist Health Care System). He served as the Chairman of Special Olympics of Maryland, and as Co-Chairman of the Maryland March of Dimes.

He also served as Chairman of the 2008 Washington DC Sports Alliance’s Sneaker Ball, which attracted a sellout crowd of more than 1,000 people to the National Building Museum.

Mr. Speros was honored by the Touchdown Club of Washington, DC, in 1995, as a “Timmie” award winner for his achievements in local sports.

He is also the Co-Chairman of the Sponsorship Committee for the Military Bowl played at RFK Stadium in Washington, DC.

Mr. Speros is a graduate of Clemson University where he played four years of football and was a member of their 1981 National Championship team. He currently sits on their Regional Board for the Washington, D.C. area. He and his family reside in Great Falls, Virginia. His son, Jimmy, attended the University of Richmond, his daughter, Alexa, is a student at Ohio University, and son, Justin, attends Clemson University.

What is the Merrick Engages Series?

Merrick Engages is a series that takes a close look at contemporary business topics through the lenses of successful business leaders. Each business leader sits down with Murray Dalziel, dean of the Merrick School of Business, and they engage in a conversation that aims to better inform us, and provide a new perspective into the business world. Each time the dialog will delve into topics pertaining to careers, business transformation and life lessons-learned.