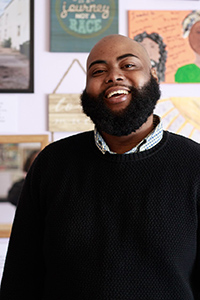 A public vote found Dorian Walker, B.S. '14, adding a T. Rowe Price "Baltimore Homecoming Hero" recognition to his list of accolades in 2022. But it's not the "what you've done" message of awards and honors that motivates him. It's the why. And the why is everything for this alumnus, who plans to finish his last semester at The University of Baltimore in fall 2022 before graduating with an M.S in Negotiations and Conflict Management.

Before his current job as executive director of the local nonprofit, Family Survivor Network (FSN), Walker's previous career was devoted to writing policy and coordinating and implementing crime control and violence prevention programs and services. Then life happened, catapulting him into something new.

The Sandtown neighborhood native's past has positioned him well to lead the FSN. A product of Baltimore City’s public schools and universities, his mission is to help survivors of gun violence regain the power they need to reframe their lives.

These survivors have clear affirmations. They are:

Walker, who wears a ready smile, is keenly aware of the impact of gun violence across Baltimore's landscape. Serving in the role he calls "energy director" with FSN requires a level of tenacity to reverse the potential stigma associated with trauma care. He works with survivors, he says—not victims. Walker operates within a community who lead with love, despite the challenges of finding peace in places that have been historically disenfranchised.

In getting to know Walker, it becomes clear that a key part of overcoming a violent experience is attitude— which he defines as self-awareness. FSN's stance, he says, is about ensuring that survivors of a tragedy involving a gun receive healing on their terms.

But what does that mean? How does that process unfold? Imagine that your world has been rocked by the senseless death of a loved one—someone close to you. The often unspeakable, unimaginable pain and grief, combined with contemporary worries like covering daily expenses as basic as food, rent, and transportation, can be overwhelming. Add in the attention needed to sustain positive physical and mental health, meeting the commitments of a job, school, or with friends and family—it's a perfect storm that may destabilize even the most steadfast person.

An organization that pivots

That's where FSN stands. The network endeavors to deliver care within 48 hours of a traumatic experience. The work starts as soon as a request for services is made.

Peers and staff work collaboratively, in-person, by phone, and virtually, to assess and deliver support. Networked contractors are mobilized as an individualized care plan unfolds. As a grassroots nonprofit, FSN is "poised to pivot as needed," as Walker says. FSN delivers services to those who prefer a non-institutional approach to care, eliminating the stressors that may lead some to feel that they are a statistic—a number, not an individual. In some ways, it's how a patient may feel under a doctor's care: I know I'm getting some help, but I wonder if they're really listening to me. This is a cold, dehumanizing machine.

Survivors, Walker says, typically find that FSN's individualized and group-centered approach delivers no-pressure care within a family-oriented environment. Participants even have the option of receiving services in their home.

Because this care takes place in what Walker calls a "judgment-free zone," survivors of violence, he says, "curate individualized healing plans for themselves," creating ripples of power around them while working toward stability, truth-telling, and community. Survivors make it through their pain to realize their passion, and then live out their purpose. They stand up for each other in an extraordinarily difficult time, demonstrating healing through community building.

FSN says it welcomes those not residing within the community as well. But in general, its services are dedicated to those who live in the city, which continues to be marked by crime and violence.

As of this writing, Baltimore Witness has recorded more than 210 homicides so far in 2022. That’s more than 200 area families within FSN's mission. It's a mission, Walker notes, that emphasizes inclusion, compassion, and equity.

Appreciating survivors as "whole humans," he adds, is foundational. Currently, the youngest survivor receiving care is a three-year-old, while the oldest is 67.

FSN's new Family House, at 1706 Laurens St., boasts art-filled walls. While this house doesn't offer overnight accommodations, it does feature desk space for staff, an apothecary, a book nook, a full-sized kitchen, and flex zones that accommodate healing techniques such as sound bathing, drumming, weaving, and "F3 Fridays"—fellowship nights held on the third Friday of each month.

Children have a space set aside for gaming, with both video and traditional board games included. But they're also living their normal lives, which includes earning community service hours. For weeks, they've been designing and building a community garden. Throughout the summer, they'll maintain it, preparing themselves for future work as entrepreneurs with a focus on sustainability. As young leaders, they work collaboratively with their peers, actively applying socioemotional intelligence skills gleaned from school and along their own path of healing.

Under Walker's leadership, unity is at the center of this nonprofit's efforts. FSN's board and volunteers operate without anyone assuming the lead. Instead, members are celebrated for their varied strengths as a group, while moving with transparent synergy as what they call "lightworkers." It's both a collaborative and individual effort, energized by an all-female board including three Black members as well as 20 percent who identify as LGBTQ+. Their activities could be described as intentional, deliberative—whatever words convey "no steps wasted."

Walker, who just entered his 30s, was tapped for his current role by board members impressed with his leadership after the sudden passing of FSN's beloved founder, Corneilius "Chappie" Scott in December 2019. Walker credits his eight siblings with keeping him grounded; age-wise, he’s in the middle among his brothers and sisters. His parents never missed an opportunity to impart the significance of shared responsibility and individual accountability. Now, he says, he enjoys seeing grace in action.

Walker's advice to those seeking positions leading a community organization?

"Embracing vulnerabilities keeps you authentic," he says. "Proceeding without authenticity often leads to someone being in danger of losing themselves. Leaders must know their why."

Another piece of advice Walker offers emerging leaders: "Moving beyond hardships, rather than running from them, yields the biggest reward."

Dorian's day—and every day is different

Walker realizes the power of his position at FSN. The buck literally stops with him. Every day, he manages, cultivates and leverages the resources that determine the quality of life for survivors of violence. Arrange a meeting, and you'll find him moving mindfully and effortlessly from the streets of Sandtown where he triages cases, to meeting rooms and public venues where he advocates for funding to support FSN's efforts. This includes covering survivor's expenses, such as memorial planning, burials, emergency relocation, and legal fees.

"There is power in presence and regardless of the timing, life happens," he says. "To survive you need tenacity and fortitude. Surround yourself with real people—in addition to your friends, and be willing to commit to a task that may evolve long after you are gone."

He credits plenty of folks, including one of his grade school teachers. He also cites "Rae" Yunzi Tan, associate professor in UBalt's School of Public and International Affairs and director of the master's program in Negotiations and Conflict Management. Among his memorable mentors are FSN board members, his siblings, and FSN's counseling specialist. But Walker's appreciation doesn't stop there. He includes people he meets randomly, as well as the volunteers at FSN who keep the community moving forward.

Recently, a 10-year-old survivor invited Walker to be his mentor. Walker's response: "An obvious yes, but I had to share with him that I see him as a role model also."

This fall, the Family Survivor Network will host its annual "Love More, Love Better" fundraiser. In the future, this event will serve as the primary source of fundraising and crowdsourcing to cover the organization's direct expenses. This summer's open house information session and fundraiser brought in $5,000. Additional funding to increase staffing is another important goal, Walker says.

The Baltimore Homecoming Hero award allowed FSN to reach some important goals this year. There is more to come, he adds.

"FSN is being welcomed and received in places, spaces, and by faces that hadn't otherwise existed for us," Walker says.

Through the coordinated efforts of Profs. Zosha Stuckey and Carrie Grant of Towson University, the Family Survivor Network receives support from that institution's G.I.V.E. program, which pairs local grassroots nonprofits with service learning.

Prof. Stuckey says, "Students get an opportunity to study and understand the history and contemporary climate of Baltimore City." It's worth noting that Towson students fill the gaps that would be alleviated by increased staffing and resources.

Stuckey says that students "have learned so much as human beings from doing this work."

For Dorian Walker, as he prepares to start classes at UBalt this fall, the learning continues as well. This avid reader (he suggests The Black Butterfly: The Harmful Politics of Race and Space in America by Lawrence T. Brown), big fan of music (everything from Billie Holiday to Kendrick Lamar) and culinary explorer ("I've never met a vegetable that I haven't liked," he says, in praise of the cuisines of Nigeria, Ethiopia and the Middle East, as well as traditional Black American dishes) is a true renaissance man.

As Baltimore continues on its path of struggle, triumph, disorder and renewal, Dorian Walker and the work of Family Survivor Network encourage us to live by their motto: Love More, Love Better.

Elizabeth Epps is completing an M.S. degree in Professional Writing at Towson University. She is a 2019 alumna of The University of Baltimore's program in Digital Communications/PR Specialization.