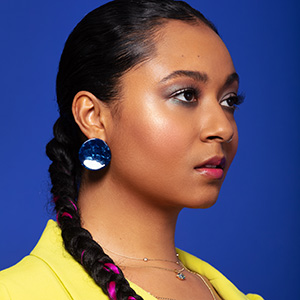 Representation matters. Not only to see, but to be seen. So as queer, Black and South Asian illustrator and graphic designer Sophia Yeshi, B.A. ‘17, forged a path for herself after graduation, she knew she would have to create space for herself in an industry where the growth of inclusivity in membership and design haven’t necessarily kept pace with technology and tools. What she didn’t know was how important it would become to her to also help make space for others to create in.

That path has led her to some incredible places, most recently to a high-profile campaign for UPS (Proudly Unstoppable) in support of black-owned businesses, especially those affected by the pandemic. Her original designs graced limited-edition shipping boxes during Black History Month this year. And while she was excited to promote a cause that’s been a daily practice in her life both in Baltimore, and in the Brooklyn, NY neighborhood where she currently resides, what she didn’t know was that her vivid, uplifting art was the first ever —by any artist—featured on those ubiquitous UPS boxes.

That’s a pretty impressive jump for a woman who got her design start at the age of 12 from a free trial of Adobe Photoshop. Six years after that free trial, Sophia and her father headed to The University of Baltimore—graphic-design proficiency in tow—and she walked away from that meeting with a spot in the Digital Communication program and a three-year work study as the graphic designer for the Office of Financial Aid based on her already impressive skills.

“I felt like I already knew I wanted to be a graphic designer when I got to UBalt and went in just looking to build on those skills. But because I already had that foundational knowledge of programs, as I progressed, I discovered I was also really looking for more of an art school experience,” she says. “Because I was trying to be as well-rounded as possible, I really wanted to take drawing classes and experiment.”

Sophia took it upon herself to seek out creative opportunities outside the scope of her program to diversify her profile. She found a mentor in former UBalt professor and director of the Integrated Design program, TJ O’Donnell; took additional art classes at MICA through a collaborative program with UBalt; and built her portfolio by doing design commissions for local entrepreneurs and creatives throughout Baltimore.

“Going to school here was different than a regular four-year university. For me it was about taking advantage of every opportunity that was available. I think as long as you’re committed and focused on your end goal, you can be successful. If you put effort and energy into the program, you’ll get a lot out of the program.”

Though her degree and experience allowed her to land a job immediately after graduation, Sophia faced the struggle many designers do: “When you’re working for someone else, what you think and care about isn’t at the forefront of your creations. I felt like the work I was doing didn’t really represent my voice, what I wanted to say.”

So, she made a big leap by relocating to a creative hub with more opportunity, and followed that with a bold leap by deciding to center her own voice, art and experience as she grew her career and business. She chose to feature both her personal and commissioned art in her online portfolio and professional website, rather than past projects for employers.

“I didn’t feature any of the corporate work I was doing and instead, I put my own work on my website and on social media. I tend to create art that features Black women, women of color, and the LGBTQ community. Because I’m a part of those communities, it was important that I was able to reflect the things my communities care about and can relate to in my work. It’s super bright and colorful. In Baltimore, I was always surrounded by people of color and that’s what I wanted my work to look like. That’s the work I wanted to get hired for.”

Her intentionality paid off. After securing a commission of original art from Converse for fun, summer-themed graphics in 2019, a former UBalt colleague—who happens to work at the hugely popular women’s media and lifestyle website, Refinery29—saw her designs online and reached out to commission her for a series of original art centering climate change awareness. Since then, Sophia’s work has been commissioned by other national and global brands including Instagram, Rock the Vote, The New York Times, Dwell Magazine, Comcast, Google and, of course, UPS.

Now armed with more big-name credentials than most can claim just a few years out of college, Sophia has found the breathing room to share the space she created for herself with others. Last year, she landed a Creative Residency with Adobe and spent a great deal of time in that program collaborating with other burgeoning designers. Speaking of collaboration, her first teaching partnership with digital learning community Skillshare was so successful, they recently asked her to create even more online classes. And, she launched a blog that has not only allowed her a different channel to establish her expertise, but also a channel that allows her to live one of her mantras: Lift as you climb.

“I think it's important to continue to uplift younger illustrators and artists in general, because it can be easy to feel like you're not part of the club. I don't ever want it to feel competitive or anything like that. And it very easily can feel like that. The more Black women and women of color that are in this industry, the better. That means there are more voices telling more stories. I've been interviewing mostly Black women illustrators who don't have a huge following. I thought it was a great way to share my platform—to both share my own wisdom and work, but also to literally give them a place to share theirs as well. Now if people come to my website, they may find them and want to hire them, too.”

Now that’s what we call paying it forward!