Olusegun Aje, a student in the University of Baltimore’s Nonprofit Management and Social Entrepreneurship master's program, is a classic example of UBalt thinking and doing: With his every move, he exudes a message of independence, of self-awareness, of real talk about real life. His message, as he prepares for his final semester while simultaneously ramping up his new Montgomery County, Md.-based nonprofit designed to help youngsters in after-school programs, is straightforward: I know what I’m doing—I have the skills and I’m learning more every day. I want to deliver on my gifts, my way. So stand back a bit—I got this.

Segun, as he is known to friends and family, has been a world traveler from the get-go. Born in Prince George's County, Md., his roots are in Nigeria, where his parents are from and where he spent a significant portion of his life. He moved around a lot, even as a young man, looking for his place. But there were constants: his driven, highly educated mother and father; his three older siblings; his Christian upbringing. His strongest value, he says, is something his parents instilled in him as a child—and which he has learned to make his own in his 34 years: Care for others, help others, regardless of the promise of a return on that effort.

It’s Aje's addition to this ethos that is key to understanding who he is and what he wants to do:

"I have so many ideas and sometimes I feel restricted. I want to feel empowered to help others here, and in Africa, too," he says.

Effective nonprofit management is a growing field. You can be part of it.

The University of Baltimore's M.S. in Nonprofit Management and Social Entrepreneurship leverages the expertise of the College of Public Affairs and the Merrick School of Business to provide a comprehensive education in two key areas of success for all kinds of nonprofits: good management, and the forward-thinking initiatives of social enterprise.

Under the direction of Prof. Jessica Sowa, a nationally recognized leader in research and teaching in the nonprofits sector, this 36-credit program includes a 27-credit foundational core and a 9-credit specialization in Global Affairs, Health Management, and General Management. Some students also gain direct experence in nonprofit management and leadership by completing an internship for up to three credits, in addition to the program's credit requirements.

After several years as an employee of the YMCA of Metropolitan Washington, and with the national YMCA organization in Chicago, as a program developer, evaluator, and staff development lead for the organization, Aje realized that he had the beginnings in hand of his own nonprofit—one that could live up to his ideals, but also managed to ensure its long-term viability.

He reached out to his older brother, Femi Aje, who runs a property management company in Laurel, Md., about realizing what had been, in essence, a shared family dream: an organization that would support young children in at-risk situations, with a model that could be replicated across the country, and, maybe, around the world.

"I said to him, 'Remember that idea we talked about—our own nonprofit? Let's do that'," he recalls.

With the kind of motivation that is rare in any field, in 2015 Aje and his brother set up GoTACS, a nonprofit with a mission to serve youth in marginalized communities. They have several goals in mind, but what inspires them most is the thinking behind the phrase "an attitude of servitude."

GoTACS recently had its first success, when the Montgomery County Collaboration Council, a gathering of service providers focused on the well-being of children in the county, approved the nonprofit’s grant application. Starting this fall, GoTACs will run an after-school program focused on teaching social entrepreneurship at two middle schools in Montgomery County. 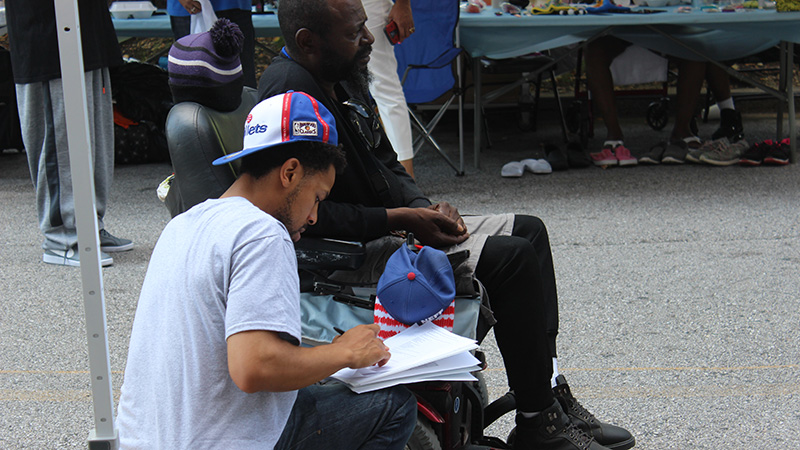 A consultant for Aje's nonprofit conducts a needs assessment with a community member in the Reservoir Hill neighborhood in Baltimore on Aug. 20, 2017.

Other grants are under development, and the organization is finding its feet. Eventually, he says, he would like to teach courses in nonprofit management, and let others manage day-to-day operations.

"I want to keep giving back," he says.

Aje has a reason for pursuing this strategy: In his experience, going back to his first job at the YMCA when he was 18, these types of organizations can't put much effort into training staff. They're so busy delivering services to clients, or applying for the next absolutely critical grant, that establishing themselves as an entity built for the long haul is not possible. In some nonprofits, this "constantly starving" mindset can work to the benefit of the organization. But too often, in Aje's worldview, the effect feels like a constant threat—it's debilitating, not empowering.

"It's just the nature of nonprofits—every year it's a crisis,” he says.

Discovering the University of Baltimore—specifically the M.S. in Nonprofit Management and Social Entrepreneurship program with its concentration in global affairs—was a revelation for Aje.

"I was looking around on the web for a graduate program—I knew I needed that,” he says. "I found UBalt, and it was life-changing. This is how I can learn to be a business owner for a social reason."

At the University, he has found proof that his core idea for approaching nonprofits with a lighter, yet more focused, managerial approach can be effective. From professors like Amir Pezeshkan and J.C. Weiss, both in the Merrick School of Business, he is learning the ins and outs of leveraging a business that turns a profit in order to provide foundational support to a tied-in nonprofit.

"I'm learning about fundraising, investing—so many things that can help me to succeed," he says. "UBalt has given me the confidence to make it."

Aje is adamant that UBalt's degree program is ahead of the curve. For example, he talks about "founder’s syndrome"—the tendency of a nonprofit's founder to hue too closely to his or her original vision, stifling the potential for the organization to change, meet new needs, and thrive in the midst of heavy headwinds.

Aje is modest in all things, e.g., he's an accomplished boxer and serves as president of UBalt's Boxing Club, and he's active in the National Society of Leadership and Success, Sigma Alpha Pi, as well as the business school's chapter of the Sigma Nu Tau honor society. But he reveals his inner strength when he talks about his nonprofit and his plan for making it work:

"I strongly believe that my time here at UBalt has prepared me to take this on," he says.

He's not asking to be handed anything—he'll create it himself.

"I got this," for sure.
UB Student Ventures